Over the past few years we've watched the Phoenix Suns abandon their Seven Seconds or Less, run and gun style in favor of a more deliberate offense with various attempts at improving the defense and rebounding. In 2008-09 the Suns added an inside presence (Shaq) and went too far away from who they were. In 2009-10 they tacked back towards their offensive game (but not all the way back) and reached the Western Conference Finals.

The big difference between the Suns transition and what the Phoenix Mercury are trying to do in 2011 was a couple of coaching changes. When Terry Porter replaced Mike D'Antoni it was too much, too fast and the wrong guy piloting the change. It wasn't until Alvin Gentry took over that a more orderly transition could begin.

The Mercury don't have that issue. They still have Corey Gaines at the helm and he's not ever going to completely abandon his style of play learned at the side of Paul Westhead. But there's also no denying that this is a team trying to alter its identity.

"We're trying to use our strength inside with Candice (Dupree) and Kara (Braxton) so we're going to try and be a little more inside-out. But our weapons have always been getting out in transition and scoring that way," Diana Taurasi said this week, playing the role of Steve Nash as the floor leader who loves to run but sees a need to change.

Gaines also has the added bonus of having a far more talented roster to work with relative to the rest of his league. Much of the Suns failures can be blamed on the front office not surrounding Nash with enough talent. The same can't be said for the Mercury.

Mercury power forward Candice Parker led the WNBA in field goal percent and both rebounds extremely well and is fantastic finishing the pick and roll. Gaines has an inside force in Kara Braxton who looks mobile and motivated this season and two of the top wing players in the game in Diana Taurasi and Penny Taylor. Both can shoot, score and handle the ball well enough to run initiate the offense from anywhere on the court.  Mix in third-year all purpose defender, DeWanna Bonner, point guard Temeka Johnson, and a deep bench and he's got plenty enough talent to compete.

Any transition requires an adjustment period and that was obvious in the first game against Seattle when despite a long training camp the Mercury were completely out of their offensive flow for large stretches of the contest. Only Diana Taurasi's ability to make brilliant individual plays kept it from being worse.

It will be interesting to watch the Mercury and see what lessons they've learned from the Suns as they move away from being a team that tries to run opponents off the court and win high-scoring contests to a team with a more balanced approach to the game.

The Mercury are back in action Friday night for the second game of their 34-game summer schedule against the Los Angels Sparks. 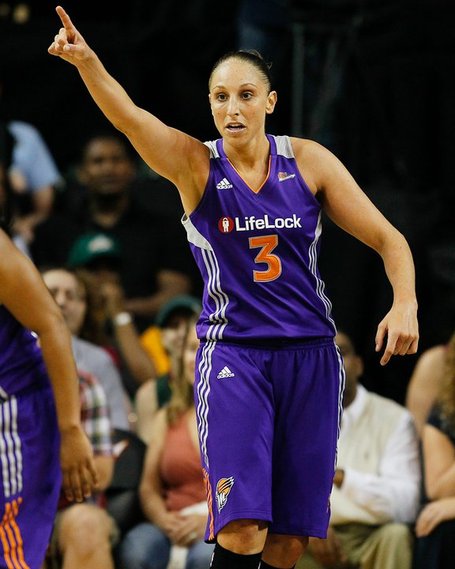