GLENDALE, Ariz. -- The Phoenix Coyotes sit two wins away from a spot in the NHL Western Conference Finals after their 5-3 in over the Nashville Predators Sunday night at Jobing.com Arena.

Let that sink in.

Already in a place they've never been, having never won a playoff series as the Phoenix Coyotes, the Desert Dogs can almost smell it. They'll certainly head to Opryland with a sweep on their minds after surviving two power play goals but getting a complete team effort in victory.

"Everybody to a man was focused on how we were going to play better (than Game 1)," Coyotes coach Dave Tippett said. "We really had a concerted push through the lineup."

The Coyotes, for only the second time in eight playoff games this month, finished the job in regulation time and not overtime. Antoine Vermette (in photo below), Martin Hanzal, Radim Vrbata, Taylor Pyatt and Shane Doan scored goals as the Coyotes came up with the most goals they've had in any playoff game this year. 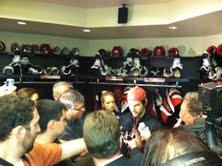 The Coyotes outshot the Predators 39-33 despite giving up the two power play scores. The had an answer for every time the Preds either tied the score or cut the lead to one.

Doan was credited with a goal at 3:36 of the third when he deflected a shot from teammate Derek Morris. That came not three minutes after the Predators made it 4-3 on a goal by Ryan Suter.

Nashville emptied the net in a final push with a minute to play, but the Coyotes withstood a couple of senseless cross checks near their goal by Predators players (one was actually called a penalty) and sent their fans home early.

Phoenix heads to Music City having won twice there during the regular season.

"It's only two games," Hanzal said. "We had some success but it's totally different hockey in the playoffs."

Tippett called Sunday's win "the best 60 minutes we played in the playoffs for sure." He said the Coyotes' attitude about Game 2, after escaping with a 4-3 overtime win Friday in Game 1, was players asking themselves why they couldn't play better in Game 2.

"You could see our guys were determined," Tippett said.

Bring On The Kings!