Coyotes Vs. Blackhawks Game 5: 'Yotes Chance To Advance Caps Off Big Sports Day In The Valley

Share All sharing options for: Coyotes Vs. Blackhawks Game 5: 'Yotes Chance To Advance Caps Off Big Sports Day In The Valley

GLENDALE, Ariz. -- As the opening faceoff approaches at Jobing.com Arena for Game 5 of the NHL playoff series between the Chicago Blackhawks and Phoenix Coyotes, it's worth noting that Saturday night's game is the capper on one of the bigger days in greater Phoenix area sports in recent times.

The day began with the annual Pat's Run, the road race in honor of the late Pat Tillman. Then came the Arizona State football spring game, also in Tempe, and the news that Coyotes forward Raffi Torres was suspended 25 games by the league for his hit on Marian Hossa of the Blackhawks in Game 3.

The afternoon brought a big game for the Phoenix Suns downtown as the U.S. Airways Center, a game the Suns needed to strengthen their playoff chances but did not get. Also downtown, the Arizona Diamondbacks played the third game of their ongoing series with the Atlanta Braves having lost four straight and reeling from the loss of several key players to injury and the disabled list.

But here in Glendale, the Coyotes can make this area feel a lot better about everything with a victory. A win gives the 'Yotes a series victory and send them on to the second round for the first time since the club moved to Arizona. The atmosphere before the game was electric and the Whiteout continues, with rally towels on the back of every seat in the building. 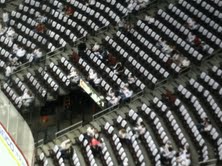 The Blackhawks are reeling. They lost back-to-back overtime games at home in Chicago this past week and lost leading scorer Hossa to Torres' check. The Coyotes have set the tone physically and can finish the job Saturday.

The fans are ready for sure, hoping the Coyotes celebrate on the ice when the game is over. 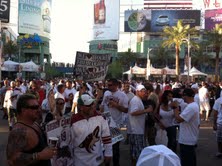