Arizona has had its share of superstars. From Charles Barkley and Steve Nash, to Luis Gonzalez and Larry Fitzgerald, we've always maintained at least a little slice of the All-Star pie.

Yet, trapped in this arid desert climate, one team could never really get into the act. The Suns, the Cardinals, and even the baby Diamondbacks; they have their own legends and myths. The Phoenix Coyotes aren't so lucky.

But it wasn't always like that. When the franchise first moved here from Winnipeg in 1996, it was led by a brash 24-year-old forward named Keith Tkachuk. Under Tkachuk's leadership the Coyotes stormed the valley, becoming an instant sensation with their high flying offensive attack and garish green and purple jerseys.

Tkachuk would lead the team to four consecutive playoff berths in the franchise's first four years, achieving the immediate success many never thought possible. While the young ‘Yotes could never quite reach the mountaintop in their short time together, it was never the fault of their captain, who fought tooth and nail to deliver us the greatness we so desperately wanted.

In just five seasons in Phoenix, Tkachuk compiled 334 points and innumerable plays that left us breathless. Even now he still holds the franchise record for game-winning goals (40), and of course, penalty minutes (1,508). But, as it often goes in sports, some things just aren't meant to be.

In the end, Phoenix traded the forward away in 2001, and while he departed on good terms, the stark truth was that once Tkachuk left, the playoffs left with him (and didn't return for eight long, frustrating years).

He played for ten more years in St. Louis -- building a legendary career from afar -- and now he will join the U.S. Hockey Hall of Fame after being inducted into the Class of 2011. The honor is wholly deserved. 5 All-Star appearances, 1,000+ career points, an Olympic silver medal; the argument could be made that Tkachuk will go down as one of the greatest U.S.-born players in NHL history.

Even so, the likely truth is that he will be remembered first-and-foremost as a beloved member of the St. Louis Blues. Yet, I can't shake the feeling that for all of us in the Valley who grew up cheering-on number seven, Tkachuk will always be wearing that goofy green and purple jersey. 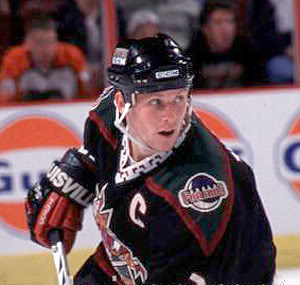 #7 of the Phoenix Coyotes, Keith Tkachuk, will be inducted into the U.S. Hockey Hall of Fame as a member of the Class of 2011. The ceremony will be held later this year. Photo courtesy of Getty Images.