Word is over 100,000 people were in the streets of Vancouver celebrating after the Canucks beat the Boston Bruins to take a 2-0 lead in the 2011 Stanley Cup Finals. While we appreciate the Canadian enthusiasm, if there's one thing we know about NHL hockey it's that no lead is safe and it's not like Vancouver has dominated the first two games the way Detroit did to Phoenix in the first round. The Canucks have just a two-goal advantage through two games.

The series returns to Boston where the Bruins will hope their home crowd can provide some kind of lift. Barring that, the hope is that the randomness of hockey shifts in their favor and they get a lucky bounce or friendly call. It's interesting to see all the talk of the Canucks dominating the Bruins in this series given how close the first two games were. Let's see what happens in Game 3.

Game 3 of the 2011 NHL Stanley Cup Finals between the Vancouver Canucks and Boston Bruins starts at 8:00 p.m. ET / 5:00 p.m. PT on VERSUS and CBC. If Boston can win this one, they are right back in the series.

The remaining schedule for the 2011 NHL Stanley Cup Finals follows: 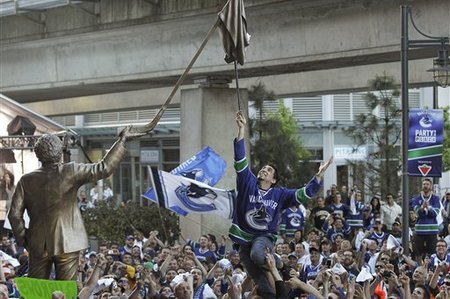