Share All sharing options for: Winnipeg Loses Chance At Phoenix Coyotes For 2011-12

As most of you already know, the City of Glendale has voted to keep the Phoenix Coyotes as a tenant of Jobing.com Arena, promising the NHL $25 million to cover losses if the team doesn't turn a profit all of a sudden.

Phoenix Coyotes Reach Deal To Stay In Glendale Another Year

Obviously, this is a stall tactic for the city, one that is reliant on Matthew Hulsizer's bid to come through in the next few months. But it's a step in the right direction for hockey fans in the Valley.

Over the past several months, we've seen a lot of passionate speech from Canadians in regards to the Coyotes. Most of the commentary targeted the mediocre crowds and the lack of fans in the city. In truth, a lot of what was said was correct -- Phoenix doesn't support its hockey team the way it should.

Regardless of your position, the time has come to face the facts: the City of Glendale has a ton of money wrapped up in this team, and the Coyotes are seemingly essential to the success of the Westgate City Center that shrouds the arena's front doorstep.

With Winnipeg out of the picture this coming season, Phoenix will have a much easier time keeping its hockey team with the right funding and ownership in place.

What I can't understand is this: when will the fans show up? Is this commitment enough? When Hulsizer buys the team, will that draw the crowds? Or is Phoenix the only city in the country that doesn't care about professional sports (outside of the Cardinals and the Suns)?

Winnipeg won't have its Jets back this season. The Atlanta Thrashers are still available, though. 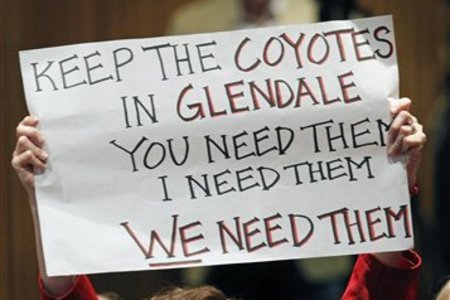 Phoenix Coyotes fan Julie Done holds up a sign in support of the team during the Glendale (Ariz.) City Council meeting Tuesday, May 10, 2011, in Glendale. After hours of testimony and discussion, the council voted 5-2 late Tuesday night to give the NHL $25 million for arena operating costs for next season. It's the second $25 million Glendale will have forked over. The city did the same a year ago and the league collected that cash out of escrow last week. (AP Photo/The Arizona Republic, David Kadlubowski)

Phoenix Coyotes Reach Deal To Stay In Glendale Another Year