The Phoenix Coyotes fight to stay where the belong at Jobing.com arena in the city of Glendale took a strange turn with news that the Goldwater Institute has involved themselves in another "taxpayer rights" case. GWI is the prime roadblock to completing the deal to keep the Coyotes from having to move to Winnipeg which several players have decried as cruel and inhumane treatment.

One might think at this point that the Goldwater Institute has a fetish of sorts for such treatment or perhaps they really like feet...or fish that eat the dead skin off feet. Thanks to local radio hosts Roc and Manuch of 1060 am The Fan, we learned via tweet of GWI's latest crusade.

Later this week, the Arizona Court of Appeals is scheduled to hear a lawsuit filed by Goldwater on behalf of a Gilbert spa owner told by the state Board of Cosmetology in 2009 that she was no longer permitted to use her feet-feasting fish during pedicures. - The Phoenix New Times reported 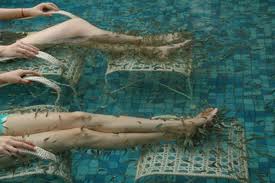 A precious nugget from this latest GWI misadventure is a quote from attorney Clint Bolick.

"Some people will view this as a fishy lawsuit. But it affects the economic liberty of every American. Too many small businesses have been destroyed by overzealous regulation. If we have anything to do with it, Cindy Vong's spa fish will not be one of them," Bolick said.

Bolick, fans of the Coyotes might recall, was the attorney famously busted for signing up on Facebook for a page that supports moving the team back to Winnipeg. The upside here for Bolick is that he can always fall back on his flesh-eating fish experience if the whole "public watchdog" thing doesn't pan out. We can't confirm that Bolick hasn't joined any foot-nibbling Facebook pages.

We also have no confirmation if GWI's Darcy Olsen tried to resolve this case with a gift of cupcakes...or maybe in this case dead foot skin would have been more her style.

Editor's Note: We can't confirm if GWI has dropped its opposition to the Coyotes deal but our standards for facts, honesty, and common decency have been lowered in order to speak to Goldwater on their level.