Day 1 of the Phoenix Coyotes Playoff Beard Challenge for Charity starts with a clean shave. As hairless as the series record between the Desert Dogs and the Red Wings going into Wednesday's playoff opener at The Joe. Smooth as a baby's bottom (which is a pretty freakin perverted phrase that's come to be commonly accepted in public speech).

People who know me, know how much I don't get hockey. The sport escapes me with all its random action. The fighting seems staged and gratuitous and the play is frenetic and completely arbitrary. Guys are big, strong, fast and skilled and hockey players are some of the coolest people anywhere, but it's a sport that this desert-breed boy doesn't understand or appreciate at all.

But that doesn't matter. The Coyotes are in the playoffs and they've asked me not to shave and to help raise money for a good cause. How can I say no?

How can you say no?

You have two options -- join the beardathon and get your face to a razor before tonight's Game 1 or pledge money to support my own beard growing prowess.

For many years now I've sported at least some facial hair. For a long time I went with a fairly long, chin only goatee but more recently have been keeping a neatly trimmed full goat.

I have one of those faces where the hair doesn't connect fully between the 'stache and the chin area so if I let it grow out if looks like a top hat sitting on a brier patch. When the cheeks and neck are left untouched as well it makes for more of a contiguous, but somewhat ragged look.

Don't take my word for it, just check back for updates as the bread grows on. If the Coyotes somehow pull off a miracle and get to the Stanley Cup finals, this could get real ugly. Really more ugly. 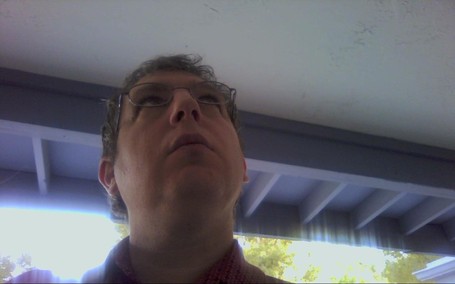 I full intend to give our staff beard expert, Justin, a run for his hairy face by the time this is all done.

Remember, you only have two options: