It ended in Toronto just a few hours ago, with the underdog Colorado Rapids taking advantage of an own goal by FC Dallas defender George John in the second overtime period to win 2-1.

Game MVP Conor Casey also scored for Colorado, which won its first MLS Cup in team history. The Rapids trailed 1-0 after MLS MVP David Ferreira scored the first goal of the game, but rallied for the upset.

The wind and cold were harsh in Toronto at BMO Field, and plenty of the announced crowd of 21,700 (likely a bit less) fans left the game early. But there was plenty of exciting moments and physical play.

John was the victim of bad luck, trying to deflect a shot from Colorado's Macoumba Kandji in the 107th minute, but instead knocking it inadvertently past FC Dallas goalkeeper Kevin Hartman.

An entertaining game for sure. The MLS season is officially over for 2010, but 2011 begins this week, effectively. The league's two new teams, the Portland Timbers and Vancouver Whitecaps, choose from the other 16 teams' rosters on Wednesday in the expansion draft. Portland picks first and there are 10 rounds.

Ok no more words (80s song, right?) Here are a couple of  photos from my last day in Toronto. 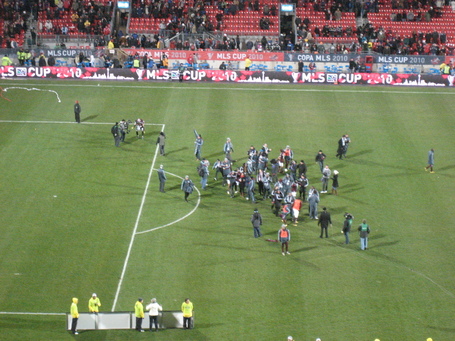 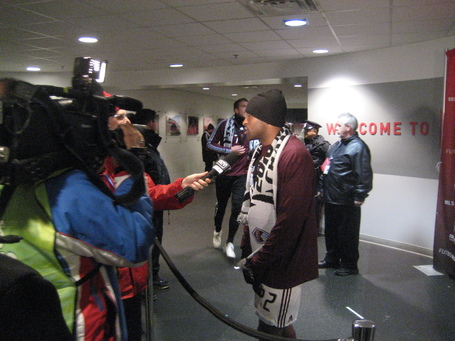 Rapids defender Marvell Wynne, who used to play for Toronto, talks to TV reporters after the game.