Omar Cummings And The Neck Warmer

Share All sharing options for: Omar Cummings And The Neck Warmer

I'm into Day Three in Toronto and the MLS Cup nears.

So far I have recognized two MLS players who are in town for the weekend. A pair of L.A. Galaxy stars, Landon Donovan and Edson Buddle. It was just too dark at the event I went to Friday night to tell what players were there.

One player from one of the teams playing for the title has created a bit of a media stir. He's Colorado Rapids forward Omar Cummings, who, as the story goes, saw an MLS-issued neck warmer on someone and decided he had to have one. In fact he vowed to wear it at practice.

The neck warmer is just that. It's looks like an oversized "turtle" part of a turtleneck shirt, except it has buttons on the front and a knit sweater look to it. Sure enough, Omar kept his word. (photo from Getty Images)

The neck warmers are one of the media gifts we reporters can choose from when we pick up our credentials. I went with a blanket. It was all about picking the best gift available regardless of need for it (sounds like an NFL draft strategy) and that blanket looked the best.

Cummings went even further. He's even wearing the mittens from MLS, another option we had as a media gift. I guess soccer players don't make a whole lot of money! You'd think the Rapids could hook him up.... right? 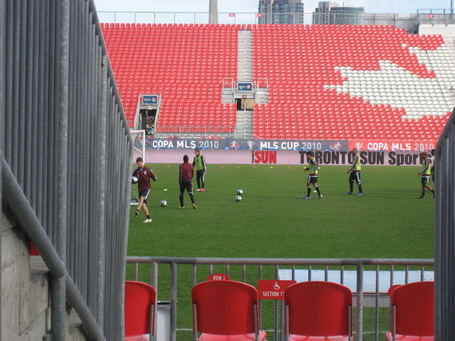 That's BMO Field above with the Rapids practicing today.

I'll sign off with a toast to everyone in Arizona, raising my bottle of Aquafina water. After all, Aquafina is the official water of MLS, as a Pepsi product. If only the Hockey Hall of Fame had free admission....