Share All sharing options for: MLS Cup: FC Dallas Is The Favorite

The Hoops are loaded with household names. Captain Daniel Hernandez. Goalkeeper Kevin Hartman. Coach Schellas Hyndman, who at 61 is a martial-arts expert.

OK not really. But to have beaten the L.A. Galaxy (the team with the actual household names, Landon Donovan and David Beckham) and defending champion Real Salt Lake, Dallas is the one everyone's picking.

Today Dallas and the Colorado Rapids practiced at BMO Field, home of MLS team Toronto FC. It was cold out but not rainy.

I was busy writing and gathering interviews. The heads of the USA World Cup 2022 bid committee had a news conference, too, and guess what? Glendale and U of P Stadium are still in the running to get matches if the U.S. gets the World Cup! Hiyoooooo!!!!

FIFA will name the nation that hosts the 2018 and the 2022 World Cup on Dec. 2. Big day. We're up against Australia, Qatar, South Korea and Japan. Top of my head, I'd say Australia is up there with us as top candidates because of the potential of the sport there. Even though a reporter said today that Qatar promised 14 fully air-conditioned stadiums. Heck it's hotter than Phoenix there in June-July.

That will do it for today. Off to a place called Eastside Mario's to get some dinner.

Oh, and MLS named Dallas forward David Ferreira the league MVP for 2010. The 31-year-old from Colombia, who is only 5-foot-5, scored eight goals and had 13 assists this season and played in all 30 regular-season games.

Below is Coach Hyndman, Hernandez, and Hartman. 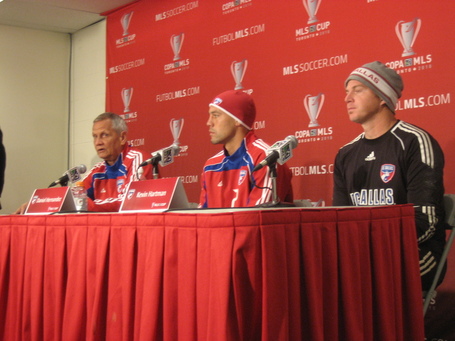