The Wildcats owned Omaha this summer. Now they get some serious bling.

The Arizona Wildcats didn't just win the 2012 College World Series; they dominated it. Armed with the best lineup in the country and gutsy pitching performances throughout, UA did not lose a game in Omaha as they won their first national title since 1986. It was a true team performance throughout.

On Friday night, the team received rings for winning the College World Series and Pac-12 conference. Robert Refsnyder, who was a key cog in Arizona's lineup all season, tweeted out a picture of the two rings he and his teammates and coaches received. Here it is. 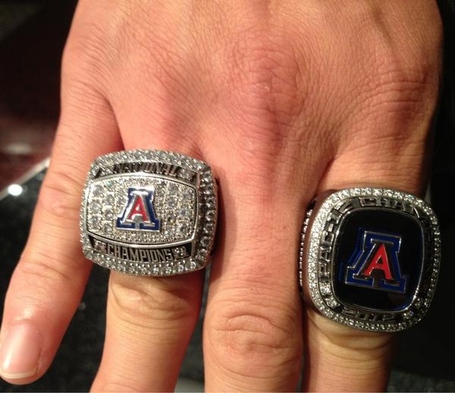 Those are pretty awesome, if you ask me.

Arizona baseball has begun offseason workouts and is now preparing for what should be another promising season at Hi-Corbett Field. Here's hoping the 'Cats bring home a couple of more rings next summer.