UPDATE: The helmets have been debunked by athletic director Greg Byrne.

The Arizona Wildcats unveiled a new copper helmet a few weeks ago that will be worn as an alternative look for a game or two, likely against Arizona State in their annual rivalry game. There had been rumors of another new helmet in the works for a few days, and they were apparently confirmed by a Wildcat on Sunday.

Star running back KaDeem Carey posted a photo of new red helmets on his Facebook page. We have the picture after the jump. 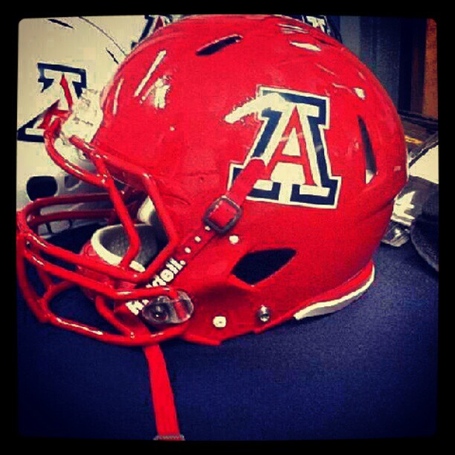 These helmets have not been confirmed by the athletic department as of yet, but it looks like Arizona will indeed have a new look in 2012 and beyond.

I'm not a huge fan of the new helmets -- it's time to completely re-do the uniform combinations for the Wildcats, but that's another story -- although it is nice to have options. I've always liked the blue helmets with red uniforms and blue pants myself. The blue helmet, blue uniform and white pants look is also pretty sharp.

What do you think of the new helmets?

For more on the Wildcats be sure to check out AZ Desert Swarm.