The 2011 NFL season is still only a post-lockout pipe dream but the 2012 NFL Mock Draft boards are already starting to seep out. The point of these early boards isn't about the NFL at all, it's essentially a guide to the college football season. Mel Kiper, the guru of the NFL Draft, has ranked the top five players at each position as a way of telling everyone from the common fan to the ESPN programming directors which players to pay attention to during the college football season.

One name that pops out atop the list of quarterbacks is Arizona's Nick Foles.

Andrew Luck is OBVIOUSLY the default number one pick in the 2012 NFL Draft and he's OBVIOUSLY the best quarterback in the field. It's after Luck where things get interesting and the name the leads the other non-Luck QBs is Nick Foles who will be throwing the ball around Tucson come fall. 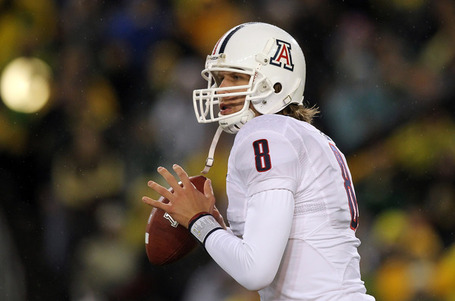 EUGENE OR - NOVEMBER 26: Quarterback Nick Foles #8 of the Arizona Wildcats throews a pass against the Oregon Ducks on November 26 2010 at the Autzen Stadium in Eugene Oregon. (Photo by Jonathan Ferrey/Getty Images)

Foles has all the tools to be successful in the NFL. He's got perfect size, a cannon of an arm and great footwork. He threw for 3191 yards last season. Here's the scouting report on Foles from one expert:

Scrambler: Nick Foles can be an effective scrambler out of the pocket. Footwork: Nick Foles puts a lot of emphasis on his footwork.

Pump Fakes Defense: One thing Nick Foles can do better than Andrew Luck or Matt Barkley is pump fake defenders.  Nick Foles doesn’t pump fake that often, but when he does you really are not sure whether he will throw the football or take off and run.

1 Step Drop: Nick Foles can make a throw off the 1 step drop.  If one of the offensive lineman misses an assignment Nick Foles can get rid of the football before pressure gets to him.

Potential: Nick Foles has the potential and upside to be a pro bowl quarterback, but he is a project quarterback who needs at least 2 years on the bench as a backup.

College football in Arizona isn't exactly a religious experience as it is in Texas, Oklahoma or Nebraska. But with Fole and ASU's Vontaze Burfict both receiving significant first round love, there will at least be a couple of guys worth watching.