How much better is this weekend going to get for Arizona basketball?

The McKale Center will be packed with 14,500 fans on Saturday afternoon for the Red-Blue Game, an event that sold out earlier this week.

Chase Budinger and Derrick Williams will have their names enshrined to the Ring of Honor and will both be in attendance. In addition, former-Wildcat greats such as Andre Iguodala, Richard Jefferson, Jason Terry, Jordan Hill and Channing Frye will all be at the game. Terry will be honored for winning the championship with the Dallas Mavericks.

As far as recruits go, all three members of Arizona's No. 1 ranked recruiting class will be visiting Tucson this weekend. Kaleb Tarczewski, a top-5 prospect who will choose between Kansas and UA in the coming weeks, is making his official visit to the campus as well. Other top-prospects from the classes of 2013 and 2014 will be in attendance as well, including Stephen Domingo.

Finally, news came today from PointGuardU.com that Nike will reportedly unveil a 'Arizona Basketball Never Stops' that is the size of a basketball court. Other schools such as Kentucky and Duke have these banners and now it looks like Arizona will get their own. We have an example of what it may look like... 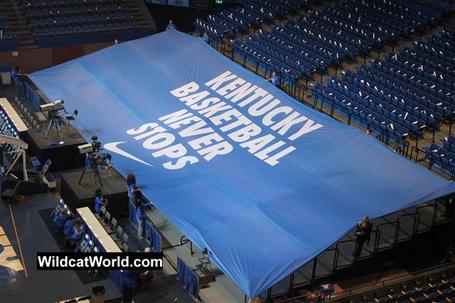 Get excited, folks. Get very excited. This is going to be a special weekend in Tucson.