After narrowing his choices down to the California Golden Bears, USC Trojans and Arizona State Sun Devils, top running back recurit and Arizona native D.J. Foster has decided to keep his talents in the Grand Canyon State and attend Arizona State University and play for the Sun Devils and new head coach Todd Graham.

Here's a look at Foster after his decision: 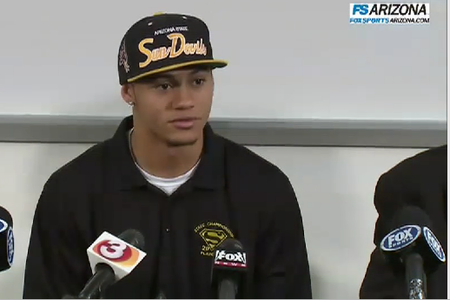 He certainly looks happy with his decision!

Ultimately Foster's decision came down to staying home. He apparently made his final decision this morning after his Father sent him a picture of him and his late sister in Arizona State clothing. His sister Jennifer passed away at age 19 in August of 2009 due to an accidental drug overdose. The decision was obviously more than just football for Foster.

Now Foster joins a rebuilding ASU squad looking to bounce back from a disappointing 2011 campaign. Yahoo! Sports ranks Foster as the No. 5 RB in the country, and No. 71 player overall in the country. He's considered the No. 2 prospect in all of Arizona.

For more in depth discussion and analysis of the Arizona State Sun Devils, make sure you check out House Of Sparky, the most comprehensive site for Sun Devil Fans on the interweb. For all the latest AZ sports news, follow us on Twitter @SBNArizona and "Like" us on Facebook.