James Harden Getting The National Love He Deserves

Share All sharing options for: James Harden Getting The National Love He Deserves

We had no doubt that James Harden would be a great NBA player. We watched James for two years as a Sun Devil and understood that his combination of shooting, scoring and play-making -- all hiding behind the powerful beard of a high character guy -- would be big hit at the next level.

Some scoffed when the Oklahoma City Thunder took Harden with the third-overall pick in 2009 ahead of Tyreke Evans, Stephen Curry and Ricky Rubio but James has turned out to be the best fit for the Thunder and the only one of those guys playing for a winning team.

Kevin Durant and Russell Westbrook help too (a tad) but as Sports Illustrated's Ian Thomsen points out, Harden is playing a big role:

James Harden makes himself into vital piece of Thunder's core - Ian Thomsen - SI.com
Harden has begun his third NBA season by emerging as the third-leading scorer of a Finals contender that has been seeking a third star to supplement Kevin Durant and Russell Westbrook. Most impressive is that Harden has made himself so important to the best team in the West while coming off the bench. 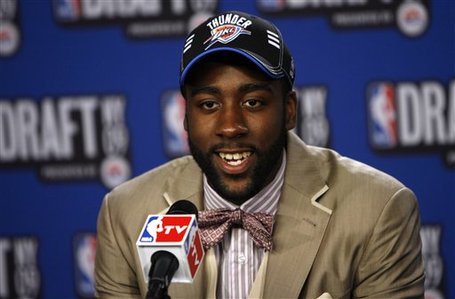 Arizona State's James Harden takes questions in the interview room after being selected by the Oklahoma City Thunder as the No. 3 pick in the first round of the NBA basketball draft Thursday, June 25, 2009, in New York. (AP Photo/Jason DeCrow)