It was a strange and slightly spooky night in Tempe, AZ as the Arizona State University Sun Devils unveiled their new all black uniforms against the white-clad Missouri Tigers. The nearly full stadium of fans were decked out for the first-ever Blackout which created quite a visual spectacle. Making the event even more memorable was the lightening strikes visible in nearby parts of town and flashing across the sky to the south. It even rained a bit.

The game was just as odd as the circumstances with both teams making big plays and both teams making multiple, painful mistakes. ASU blew a 14-point fourth quarter lead and Missouri wasn't able to convert a game-winning field goal from 47 yards. Fittingly, the game went into overtime where both tired teams continued to slug it out.

In the end, Brock Osweiler was able to manufacture a touchdown with an 11-yard pass to Jamal Miles on the first over time possession. The Tigers were held in check on their overtime attempt to give the win to the home team.

"Our team is just relentless. We could not give up. We came onto the field tonight wearing t-shirts that said "Band of Brothers" and we firmly believe that is how this team is and how we stick together and ultimately, how we get through these hard fought games."

ASU moved the ball extremely well all game and took a 14-point lead early in the fourth quarter. Unfortunately, just as we saw with this team last year, mistakes were their worst enemy. A fumbled punt after an important defensive stop and numerous penalties allowed the Tigers to close the gap to within one touchdown.

After getting the ball back, the Sun Devils defense looked like they were going to hold before the Tigers converted a fourth down and managed to recover from third and 29 to complete 49-yard pass and move into the red zone. The Devils defense cracked under the pressure and gave up a game-tying touchdown on fourth down and four.

Brock Osweiler got the ball back with under three minutes with the ball on the 40-yard line but wasn't able to get even one first down which gave the ball back to Missouri with time on the clock.

Missouri started their drive around their own 10 yard line with under two minutes and quickly racked up 39-yards on a run to the outside, once again taking advantage of the Sun Devils inability to contain the edges. A few more plays moved the Tigers within field goal range.

Kicker Grant Ressel missed a 48-yard attempt that would have won the game with only 12 seconds on the clock. The miss sent the game into extra time.

ASU finished with 492 total yards compared to 501 for Mizzou. Osweiler had an outstanding game as he threw for 353 yards on 24-32 passing with three touchdowns and no interceptions. Brock also ran for a TD and 37 yards.

Missouri's James Franklin was 25-40 for 314 yards with two touchdowns through the air. He added 94 yards rushing on 25 attempts with another touchdown. ASU receiver Aaron Pflugrad caught eight passes for 180 yards for a performance coach Dennis Erickson said was among the best he's seen from a receiver.

"Aaron Pflugrad had one of the better football games I have ever had from a receiver. I don't know how many catches he had, I don't know the stats, but what I do know is that every time we needed something he made a big play. He was without a doubt the most valuable player in that game and made plays every time," Erickson said.

On the messy side, both teams combined for 21 penalties for 214 yards. The Sun Devils had a point after attempt blocked and missed a 42-yard field goal.

All said and done, it was a big win for the Devils. A loss would have set a bad tone for the season. A loss after leading by 14 in the fourth quarter would have been a gut punch. 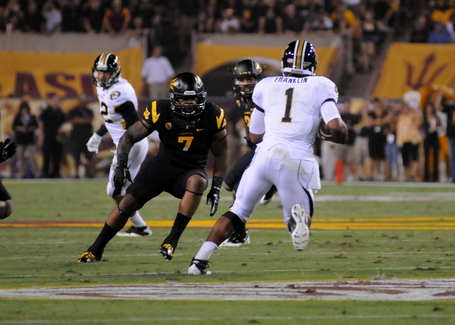