Share All sharing options for: Vontaze Burfict Sending A Message To USC And Matt Barkley With Pick And Penalties

USC quarterback Matt Barkley tried to get under the skin of the Vontaze Burfict, ASU's volatile linebacker, with some long range smack talk during the week leading up to the big conference game between the Sun Devils and Trojans. Barkley called Burfict a "dirty player" in reference to their time playing against each other in high school.

Arizona State University coach Dennis Erickson reacted by saying it's the kind of things all Sun Devils opponents due these days. They try and get Burfict riled up and bait him into stupid plays on the field. Unfortunately, it works.

Three quarters into the game, we've seen enough to know how Vontaze is going to react. He has four tackles and a crucial interception in the game that stopped the Trojans in the red zone and with a 36-yard return gave his team the ball near midfield. The Sun Devils would go on to score on the possession.

Burfict, unfortunately, sent another message as well. He cost his team six points with two penalties. In the first quarter, Vontaze was whistled for an offsides infraction on a 46-yard missed Trojan field goal attempt. The second attempt from 41 yards was good.

In the second quarter, Burfict picked up a personal foul for hands to the face which moved the Trojans to the Arizona State 14-yard line. The drive ended in another Trojan field goal.

The two sides of Vontaze Burfict are certainly on display in this game. 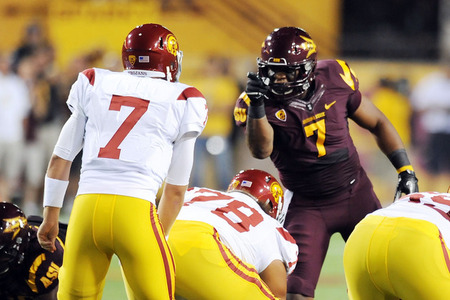 TEMPE, AZ - SEPTEMBER 24: Vontaze Burfict #7 of the Arizona State Sun Devils points and yells at quarterback Matt Barkley #7 of the University of Southern California Trojans just prior to a play at Sun Devil Stadium on September 24, 2011 in Tempe, Arizona. (Photo by Norm Hall/Getty Images)