Share All sharing options for: ASU To Go All-Maroon Uniforms Against USC Despite Much Better Options

With Arizona State's new bevy of Nike-designed uniforms combinations, the Sun Devils have followed the lead of their conference rivals in Oregon. If they can replicate the Ducks' success, so be it.

After going all-black against Missouri and all-white last week in Illinois, the Sun Devils are going to continue their monochromatic ways this week when the host No. 23 USC.

The Sun Devils will debut the final of their four new helmets when the maroon model will top an all-maroon uniform.

It will be interesting to see how the two quarterbacks-ASU's Brock Osweiler and USC's Matt Barkley-deal with the similarities between the Sun Devil and Trojan helmets during their quick reads.

One is left to wonder if an all-gold scheme awaits next week against Oregon State to complete the four monochromatic combinations.  Let's hope they don't make that mistake again.

Here now are this writer's top five picks for remaining ASU uniform combinations, which you can recreate thanks to this awesome uniform creation tool.

2) Black helmet, black jersey, gold pants: If you want to use one of the best color scheme's in sports, may as well pattern yourself after the best.

4) Gold helmet, maroon jersey, white pants: A swap of pants to their opening day ensemble would register as one sweet uniform.

5) White helmet, black jersey, white pants: The awesome white helmet makes it's third appearance on the list, and deservedly so.  This would be an excellent late season choice.

They at least must be better than what we'll see this Saturday, but then again, as long as they win, they can wear whatever they want. 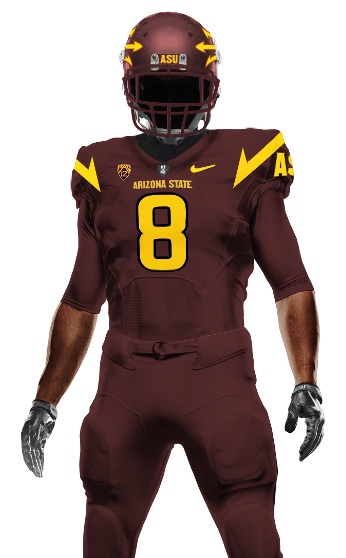