With the beginning of the 2011 college football season comes the official debut of ASU's new uniforms. The Sun Devils unveiled their new Nike look in April in front of a big crowd at the Memorial Union on campus. The reception was warm and the Devils look to capitalize on their experienced roster with a new look and a favorable home matchup against UC Davis on Thursday night.

Sparky, ASU's Disney-designed mascot, has been relegated to the sidelines and as a smaller sticker on the back of the new pitchfork-themed helmets. The field prominently features the pitchfork at midfield, while Sparky dots the 25-yard line.

The Sun Devils begin 2011 wearing their traditional color theme: maroon jersey with gold pants and a gold helmet. Transitioning fans into a new uniform can take time, but ASU has capitalized on the merchandise, with season ticket sales reportedly up 4,000 from last season.

Next week, ASU will wear all-black uniforms in the school's first Black Out game against Missouri. The third game of the season, a road match against Big Ten foe Illinois, will be the debut of Arizona State's all-white color scheme.

For more on the Sun Devils as they take on the UC Davis Aggies, check out House Of Sparky.

View of the field for the first pitchfork game: 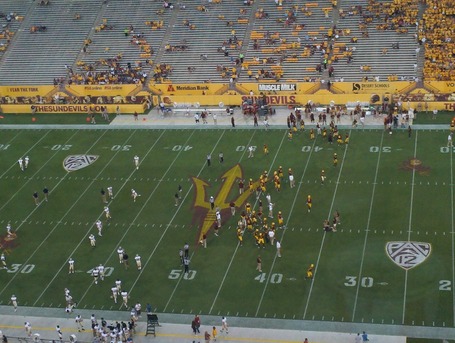