Brock Osweiler is the man at quarterback for Arizona State going into this season, and he's accepted a leadership role. He'll be the guy running the show when the Sun Devils take the field in the season opener on Thursday.

One guy fans can be happy for on this Arizona State football team has to be junior quarterback Brock Osweiler.

Here's a young guy who came to ASU in 2009 No. 7 on the depth chart of Sun Devils' quarterbacks. Instead of getting discouraged, he worked hard and ended up playing in six games as a true freshman.

Osweiler seemed destined for a long term as ASU's lead signal caller, until transfer Steven Threet beat him out in a close competition for the starting job last season. But Osweiler stayed strong, waited his turn and when injury knocked out Threet, grabbed the reins to lead a 55-17 comeback win over UCLA.

The following week, Osweiler experienced his finest hour (or three or four) as a Sun Devil, passing for 267 yards and touchdown in ASU's upset of Arizona in the Territorial Cup to end the season.

Now, with three days until ASU opens its 2011 campaign against UC-Davis, Osweiler is firmly in command, a 6-foot-8 field general who looks and sounds like he's having fun.

"I'm just excited for the opportunity," Osweiler said Monday. "A lot of great quarterbacks have played in that stadium and it's an honor to be a part of that group now."

Osweiler, a native of Kalispell, Mont., reflected on his past as both a high-school athlete from a close-knit community who turned down a basketball scholarship offer from Gonzaga to focus on football ("I thought about it every day for three years"), and as an ASU backup quarterback.

"When the starter's struggling, the fans love you," Osweiler said. "It's an experience a quarterback needs to go through. It's what prepares you to be a starter. I learned a lot from it and I wouldn't change how anything went down last year."

He has high hopes for the ASU offense, calling it a "fastbreak team on grass."  Coach Dennis Erickson said ASU will throw 50 times a game.

"It's exciting to think about what could potentially happen this year," Osweiler said. 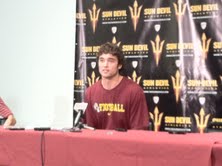 Osweiler has dreamed of being a starting quarterback since he was five years old. He said he learned how to be a leader by watching his father, John, when he was young.

"I saw how he treated people and how he reacted to certain situations," Osweiler said of his dad. "I've really studied the game of football. Been a guy who's watched every game on Saturdays and Sundays growing up, so I watched what those other quarterbacks did. I watched what they say to the media and just tried to learn from as many situations as possible.

"The way I looked at it is, if you're going to play Division I football and be a starting quarterback at that, you're going to have to beat out good guys," he said. "Transferring was never the answer to that. ... My thing was to be the hardest-working guy in this building and earn my spot. I just looked at being No. 7 (on depth chart) as a challenge."

The only goal Osweiler has for this season is winning a Pac-12 title. "If we do that, then every other goal that I could ever try to write up or think about is taken care of," he said.

Look for Osweiler to be a go-to guy for the media for a good quote this season. He began his Monday news conference by asking reporters a question: Whom did he throw his first college TD to?

The answer: Brian Matsumoto on Sept. 5, 2009 against Idaho State.