Robinson, a senior from Chandler, has big plans for his team, too. Even though he's working his way back from a knee injury earlier in fall camp and has a history of injuries.

Robinson must stay healthy after being somewhat limited last season due to a nagging hamstring. His size and big-play ability are key factors in making him a prime target for quarterback Brock Osweiler.

Robinson said earlier this week that he knows where he's going. Clarification, please?

"We're going to a BCS game, I know that much," Robinson said with no hesitation, "and then the Pac-12 championship game."

Individually, Robinson hopes to go to the NFL and, "be able to come back and see another BCS game happen here" at ASU.

Big talk, but you give the young guy a pass because after all, this is college football and he's a college student. And the media in these parts -- including this writer -- isn't going to jump all over his words and make them a big deal. There's nothing to be gained from it and he's showing confidence in his team. 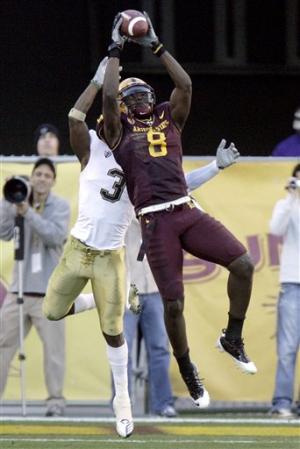 Robinson also talked about his maturation process, saying he "had a big man's body with the mind of a boy." But now he has grown up and accepted things about himself.

Soon enough we will see if he can walk the walk with his play on the field, and if indeed Robinson can make a stronger case for NFL consideration next year.