Share All sharing options for: Crying Time Over For Brandon Magee, Now Devils LB Is Upbeat

Brandon Magee squeaked his way inside the Dickey Dome Wednesday for about half of ASU's football practice.

The four-wheeled contraption he was on allows him to keep his injured left leg, which is in a boot, elevated while he pushes off with his right leg to move forward on the push scooter.

Magee stopped to chat with reporters, 11 days after rupturing an Achilles tendon at a scrimmage. He's out for the season but by his account, fully intends to return for spring football.

On the day he was injured, Magee's mother happened to be there. Magee was man enough to admit he cried -- as in tears -- about his situation. Now he's back to making jokes the way he always has, and being positive.

"I knew I was done right when it happened," Magee said, adding, "I live my life to the fullest every day."

The senior linebacker from Corona, Calif.,  plans to petition for a redshirt year this season. For now?

"I'll be in the weight room getting my upper body tight, come back looking Ray Lewis out here, you know?" Magee cracked. "Might as well do something good for myself." 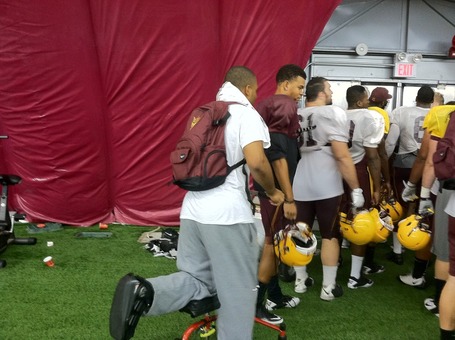 Magee (seen above pushing himself out of practice) is no longer on the ASU baseball roster and that doesn't seem to be in his plans. He considered signing a pro baseball contract with the Oakland Athletics  this summer before football camp but returned to the Sun Devils to be with his teammates.

The boot comes off his leg next week, then he will get used to walking on the leg and then rehab. It's a six-month recovery time, he was told. "But I'm different," Magee said, "so I think it will be like, four. I hope for four, because I train hard and I have high hopes."

Magee vowed to be ready for spring football practice in 2012. He's commiserated with teammate Omar Bolden, who himself suffered a major injury in the spring and is trying to come back from it.

The plan was for Nos. 6, 7 and 8 -- Shelley Lyons, Vontaze Burfict and Magee -- to terrorize Pac-12 opponents this season. But Magee won't be there; Senior Colin Parker worked with the first-team defense Wednesday at Magee's outside linebacker spot.

"I try not to think about it, really, but I'm excited to watch them play," Magee said. "How can you not be?"

Magee is doing what he can to help, attending meetings and imparting senior wisdom to teammates. So does he try to convince Burfict to return for another season after this fall?

"Whatever the best opportunity is for Vontaze, I'm just going to support him," Magee said. "It's his life. One of us has got to make it, man, so if he's the first one to do it, then I'll be the one celebrating with him."

Teammates swarmed around Magee to say hello and check out his new "ride."

"For him to be out here supporting the team, that means he's got our back and we just have to make sure we go out here and win these games for him," wide receiver Gerell Robinson said.

Notes: CB Deveron Carr is expected to be at "full speed" for ASU soon, and if he returns to that by Sunday, coach Dennis Erickson said Carr could be ready for the season opener...  Previously injured RB Cameron Marshall took part in all of practice... Erickson is waiting for someone -- Mike Bercovici or Taylor Kelly -- to step up and take a firm grasp of the backup QB spot. A decision could be made by Friday, he said.