Arizona State middle linebacker Vontaze Burfict will be a junior this year. He's shown flashes of brilliance on the field with his aggressive and athletic play and he's a physical specimen. He's also shown considerable immaturity and poor decision-making with some of the personal foul penalties he drew and then eventually was baited into as the season progressed.

Burfict has all the talent in the world and the preseason All-American candidate was tapped in the most recent 2012 NFL Mock Draft from Todd McShay as a first round pick. McShay currently has Burfict going to the San Diego Chargers with the 22nd overall pick in the draft.

Burfict is a work in progress and needs more game experience and coaching, but he is a physical specimen who can play sideline-to-sideline and blow plays up like no other linebacker in the country. 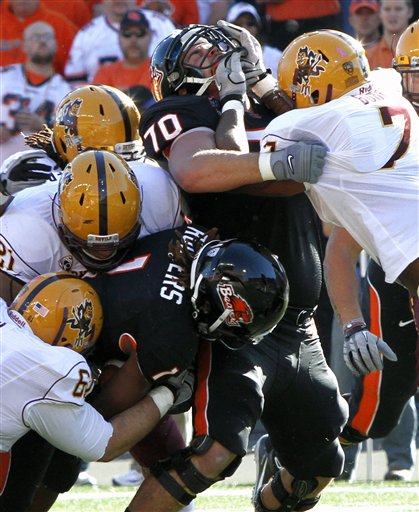 Burfict is well aware of the penalty issues but isn't very talkative on the subject according to this ESPN story by Ted Miller.

"It matters what times you're talking about. They are totally different times. Some calls are bull crap."

Playing "crazy" is just part of the package with Burfict and a big reason why he's currently slotted as a first round NFL Draft pick. If he can control some of the after the whistle fouls and demonstrate a bit more maturity, Burfict could easily be the top inside linebacker in the nation.

2012 NFL Draft: Where Will Vontaze Burfict Get Drafted