When the powers that be at Arizona State University and their corporate overlords sponsors at Nike came up with their flashy new font, logo and uniforms for the Sun Devils they were probably thinking of the obvious things. New uniforms increase school spirit and help with recruiting and of course, selling more merchandise won't make anyone lose their job.

What they couldn't have anticipated was the ripple in the pond effect spreading to the mean streets of Chicago.

According to a Bob Young report in the Arizona Republic on Tuesday, the Satan Disciples gang already uses a trident symbol in their tattoos and tagging. According to an ASU alum who's also a gang cop in Chicago, the problem is all but a given.

"The gangs adopt sports teams and wear their gear," Sgt Kenneth Epich said. "The S.D.'s are going to adopt the (ASU) hat as their hat of choice just as soon as they see the first person wearing one."

ASU has no intention of letting it's logo be used as a symbol for violence and crime. They are on the case according to the associate athletic director, revenue generation at ASU, Steve Hank.

"The one thing we can tell you is we vigilantly defend our marks," said Hank,  "If they were to use it in that way, we would take all legal action to protect our mark."

ASU's lawyers versus a mean Chicago street gang fighting over trademark use. I smell a TV mini-series.

Of course, gangs adopting sports teams hats is a wide spread issue but according to this official-looking document from a gang enforcement web site, it will be the first time and Arizona team enters the thug life.

Welcome to the big time, Sparky. 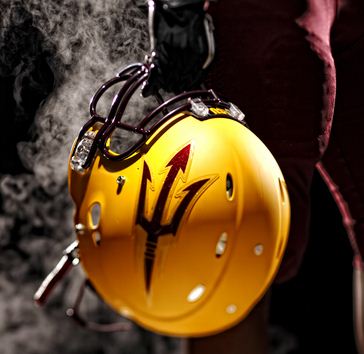