Cleveland Cavaliers coach Byron Scott and Memphis Grizzlies coach Lionel Hollins were celebrated at halftime of Arizona State's game against Washington on Thursday night in an acknowledgement of their excellent careers both during and after their time at ASU.

The celebration on Thursday evening was long overdue, considering both Scott and Hollins were great contributors to some of the best ASU teams of the past. Scott was flanked by his wife and daughter, while Hollins was also joined at center court by his wife.

The crowd was respectful and loud, cheering emphatically for both NBA coaches. The sizable Washington Huskies contingent joined in the applause. 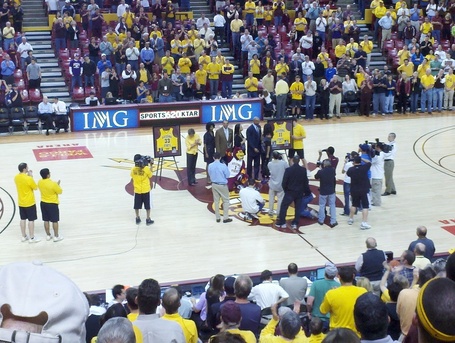 James Harden, sitting courtside with Antwi Atuahene, was distracted during the festivities, and was seen taking a picture with an enthusiastic Sun Devil fan. When your current team is so bad, it only elevates Harden's memory even higher. I'm not blaming him - he's a nice guy to take a picture with a fan, even if it was at a bad time.

The ceremony was tasteful and the unfurling of the rafter-bound jerseys was well done. Both deserved this, and we can expect both James Harden and Ike Diogu to head to the rafters within the next ten years.