Share All sharing options for: Outgoing Erickson Hoping For 'Business As Usual' As Team Prepares For MAACO Las Vegas Bowl

TEMPE -- Twelves days from Saturday, Arizona State faces one of the top college football programs in the nation, Boise State, in the 2011 MAACO Las Vegas Bowl. The Sun Devils opened practice for the bowl game Saturday amid the local buzz about star linebacker Vontaze Burfict, outgoing coach Dennis Erickson on the sidelines for his last game and the search for a new head coach.

School officials requested media members refrain from asking Erickson, who was made available after practice, about his future or thoughts on his job and the situation at ASU. But that didn't deter questions to players about Erickson nor about the process of finding a new leader for the program.

Quarterback Brock Osweiler said he was among nine junior-class players asked to meet with Lisa Love, ASU vice president for university athletics, recently. He was asked why he thought current offensive coordinator Noel Mazzone would be a good head coach for ASU.

"Obviously I would like Coach Mazzone to stay here. I'm the first one to admit that I would not be where I'm at today without him," Osweiler said, then called Mazzone a "father figure."

Osweiler added that all of the talk about who will be the new coach has weighed on him a little, but he's trying to stay out of the hiring process and expressed faith in ASU for picking the right candidate.

"I'm going to trust that that's the best coach for the job. I'm going to believe in the coach. So I'm trying to stay out of it and let the professionals do their job," he said.

Erickson was asked about the enigmatic Burfict, whose lasting legacy in Tempe might be the image of him standing on the sideline with helmet in hand late in the season finale at home against Cal, yanked from the game after costly personal foul penalties he incurred. Burfict practiced Saturday but not with the first-team defense.

"There's no plan for anything until we go through practice," Erickson said, not committing to giving Burfict  -- once regarded as one of the top defensive players in America -- back his starting job. 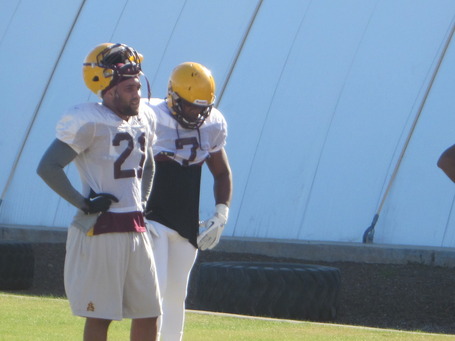 Burfict will make the trip to Vegas with the team, Erickson said, refuting a report that he refused to go back into the Cal game.

"It's amazing the rumors that are created in your business," Erickson said before labeling Burfict's 2011 season "pretty average. He just didn't play like he did the year before."

Erickson then turned the focus to the team and the bowl game.

"It's an opportunity for them to play one of the best teams in the country and finish if off right. Go out and compete and see what we're all about," Erickson said. "We want to finish off the season right and play with pride... We'll prepare the same way that we always have, and we will. It's business as usual but obviously it's the last game of the season, it's a little different situation."

Lost in all of the news of the day was the fact that the Devils had a spirited practice that saw recovering defensive back Omar Bolden take part in individual drills wearing a brace over his left knee, and some good action. Erickson said Bolden should be ready for Pro Day next spring, when NFL scouts come to campus to see what outgoing players have pro potential.

"It was good to be back," Osweiler said. "Great energy, great enthusiasm... These two weeks that we had off were very refreshing."

Osweiler and senior defensive tackle Bo Moos expressed a desire to win the game for Erickson and for themselves and the team.

"I expect us to play with that passion and I expect us to be hungry and ready for a win," Moos said. "Just wiping the slate clean... we're just coming together and trying to get this one for Coach Erickson."

The Devils (6-6) are two-touchdown underdogs to the BCS No. 7-ranked Broncos (11-1) and golden-armed QB Kellen Moore, and are coming off a run of poor play to end the regular season.

"That's fine. There was a lot of games this year where no one gave us a chance," Osweiler said. "But the beauty of football is they put their shoes on the same way we do and we're going to go out there and lay everything on the line."

Note: DE Junior Onyeali was not at practice. He was attending a funeral for a family member.