Share All sharing options for: Vontaze Burfict NFL Draft Stock Impacted By Oregon Game...Or Was It

With national exposure comes national criticism. After Arizona State's first conference loss to Oregon on Saturday, there were outcries that Vontaze Burfict has played like ASU's  "third best linebacker this season."

While these allegations can be substantiated with a simple look at the stat sheet, I think that's more to do more with two breakthrough seasons from Shelly Lyons and Colin Parker than a severe drop off of play from Burfict (And I believe Burfict is the first person Lyons and Parker would credit with their strides of improvement).

Sure, some will say that allowing 327 rushing yards is unacceptable, especially when Oregon was missing the best running back in the nation, LaMichael James. But remember that backups Kenjon Barner and De'Anthony Thomas are by far no slouches and are talented enough to start on a considerable portion of FBS teams.

Oregon is ranked 5th nationally in rushing for a reason and they would have racked up the yards regardless if Burfict or Patrick Willis was manning the middle.

And we can all come to the conclusion that personal fouls are never a good thing, but those who had heard of Burfict's history were clamoring about his two flags like he just punched punched Ben Roethlesberger in the face or something. Though the second call seemed legitimate, the first was more of an instance of an already trigger-happy Pac-12 ref tossing some laundry purely based on Burfict's reputation.

Yes, Oregon tight end David Paulson did step out of bounds. But he was clearly back in bounds, running full-steam ahead when Burfict hit him.

Don't believe me? Look for yourself: 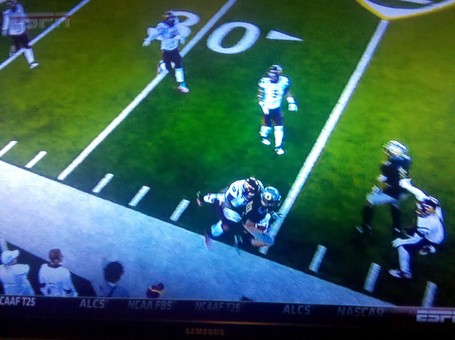 How can Burfict be expected to entirely stop his momentum the second the whistle blows when he is in a dead sprint from mid-field? And first there are complaints that Burfict has gotten soft as he's overcompensated to try to cut down on penalties then he plays his first balls-to-the-walls game of the season and there's an uproar? But I digress.

The fact is Burfict still compiled seven tackles, his second highest total of the season. And while that might be a testament to his offseason, it certainly doesn't mean that this game is the reason his arrow is pointing down.

Those who are overreacting about his stock plummeting after one game are the same who are panicking about ASU's chances at getting to the Pac-12 Championship game after one conference loss.

There is no doubt that this year hasn't been Burfict's finest in his three year Sun Devil campaign. But that's just part of the growing pains as he attempts to correct his biggest flaw and find that balance between playing smart and playing timid.

And it's not like all is bad; for the first time in his collegiate career, Burfict is on his way to totaling up a new career high in an unfamiliar stat: wins.

So trust me fans when I say that Burfict will still be a first round pick. He's still the guy that one NFL scout once called, "What you get when you kick Ray Lewis' dog"; no one's just kicked the dog yet.