Share All sharing options for: Brandon Magee, A Sun Devil Brimming With Confidence

Meet Brandon Magee, one of the trio of Arizona State starting linebackers who all attended the same Southern California high school and reunited in Tempe. 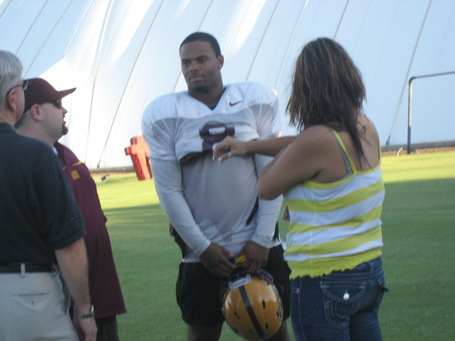 Earlier this week, it wasn't a given that Magee would play against No. 5 Oregon because of a leg injury suffered at Wisconsin. But he practiced Thursday and proclaimed himself "100 percent." Ah, the rejuvenation powers of being young.

Magee isn’t only expecting to play, the junior is talking up the Sun Devils defense as a unit that will surprise the offensive juggernaut that is the Ducks.

"They haven't played the Sun Devils yet," Magee said. "So that's all I can say."

Well, not all. Magee gave the Ducks credit, talking about their athleticism at every position and how the offense spreads out defenders and forces them to stay in their gaps or be susceptible to a big play. He said he's excited to play such a high-scoring offense.

"They're pretty fast on offense, but they haven't seen a defense as fast as ours, either." Magee said. "It's pretty equal, to me."

The Ducks are clearly on the Sun Devils' minds. Their scout team tried its best to give the starters as good a look at what to expect from Oregon's offense as possible. One of the scout team players even made an "O" out of tape and stuck it on his helmet, to simulate a Ducks helmet.

One key for the Sun Devils is not stalling in the red zone like they did last week.

"They're fast and athletic," quarterback Steven Threet said of the defense once known as "Gang Green." "They try and make you make mistakes and capitalize on them. Get turnovers and get their offense back on the field."