Thomas Weber, barring the ever-so-slight possibility that the NCAA grants a bowl eligibility waiver to Arizona State, has ended his career as a Sun Devil. It has been both illustrious and disappointing.

He started with a bang as a freshman, missing only one field goal all season and winning the Lou Groza Award for the nation's best kicker. The next two seasons were riddled with injuries that hindered his effectiveness and with on and off punting duties that took focus away from kicking.

Coming into this season, he was healthy again. Watching him in spring practice, he was a little shaky, but towards the end of spring and then in the summer, he was kicking with great authority. Many considered him the wild card for a Sun Devil team that was intriguing. But this season was a disaster for Weber. 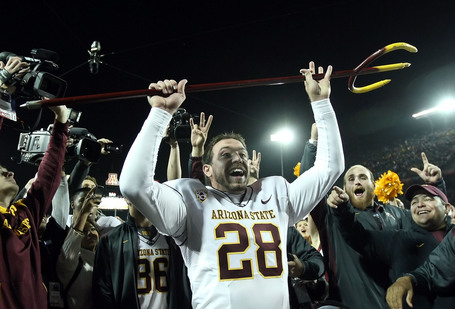 Against USC, the blocked PAT bit Weber in the butt again, but this time the Trojans picked up the ball and returned it for two points. Weber was given the chance to win it for the Sun Devils with a 42-yard field goal, but he looked nervous and like a man waiting for a bad thing to happen and missed the kick. ASU loses by one.

Against Stanford, he flat out missed an extra point. The Devils were up 13-10 at the time. At that point, ASU fans pretty much knew that the game was over. Stanford scored a touchdown to go up by four. Because of Weber's miss, ASU had to score a touchdown. They could not go for the tie with a field goal. Devils lost 17-13. In any case, after seven missed field goals up to that point, it wasn't as if many believed that he would have hit the tying kick if given the opportunity.

I know reading body language is bad (read what our very own Dennis Tarwood wrote about it here), but kickers tend to show what they are made of on the sideline. Weber looked like a broken young man, someone who was completely confused with what he has been going through.

That all changed against Arizona. He was called upon for a 52-yarder and killed it. He came on for a 36-yarder, and hit it. He looked confident again. He hit three more and looked good doing it. He boomed his kickoffs. He even put a pretty hit on an Arizona kick returner, knocking him out of bounds and possibly saving a touchdown for the Wildcats. His one extra point attempt? He hit that, too. (I will admit, though, that when ASU went for two after a touchdown, I joked that it was a good thing they had to score two considering their luck with PATs this season).

After James Brooks blocked the PAT at the end of the fourth quarter, I am sure that ASU fans everywhere were certain that if Brock Osweiler and company could get the Devils into field goal range that Weber would have won the game then. In the first OT, when Weber came on to hit his fifth field goal, the fans I was with were not worried, unlike other times this season. They knew that the second OT was coming.

Now in the end, we will remember James Brooks for the two blocks, Brock Osweiler for his runs, Vontaze Burfict for his dominance and intensity without the penalties and Brandon Magee for being seemingly all over the field. But Thomas Weber, by hitting every single kick he attempted, saved the game, ASU's oh-so-slim bowl hopes and his season. He ends his career on a high note and, at least for me, almost erases the other struggles he had.

It is that Thomas Weber that will likely find a job kicking a football on Sundays.