Lunch And Locker In Seattle (Since It's A Night Game)

Share All sharing options for: Lunch And Locker In Seattle (Since It's A Night Game)

The Puget Sound area of Washington state is home for Dennis Erickson. The ASU coach hails from Everett, about 30 miles north of Seattle.

Lovely part of the country. If you're going up for the ASU-UW game this week, here are a few places near Husky Stadium to try the local chow(der). These were my favorites when I lived there.

1. Ivar's Salmon House and Fish Bar. Located just west of Husky Stadium where Lake Union and Lake Washington converge. Great clam chowder, shrimp and clams. And they're best known for their fish and chips. If its nice out, you can eat on a dock right on the water with a great view of downtown Seattle and the Space Needle.

2. Red Mill Burgers. Probably the best burgers in Seattle. Take N.E. 45th St. west from the stadium all the way to Phinney Ave, right on Phinney at the zoo and Red Mill is just up the road. There will be a line on Saturday but it's worth it.

3. Costas. It's a Greek food place on University Ave. right near campus, and I don't like Greek food. But their grilled chicken sandwich and potato chip/fries was the best around.

I could talk about food forever. But this is going to be a football post, at some point.

Erickson is concerned with the number of big plays his team is allowing. He said Oregon State gained 290 yards of offense on 12 plays last week in ASU's 31-28 loss.

Washington QB Jake Locker can hurt teams with big plays. The senior made quite a splash in the Emerald City when he decided to return to school for his senior year, and UW is 2-2 with just one bad loss to a very good Nebraska team. 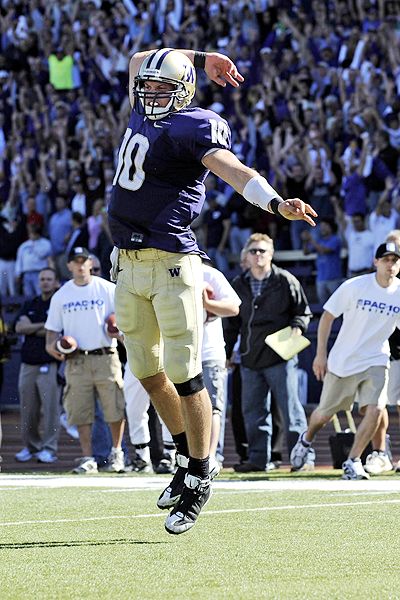 Locker's passed the 6,000-yard mark for career passing yards, gained 420 yards of total offense by himself in last week's upset of USC and is second all-time in UW history in career total offense with 8,074 yards. Considering that Washington has had a lot of quarterbacks in the NFL (Huard brothers, Chris Chandler, Mark Brunell, Warren Moon, Marques Tuiasosopo, Cody Pickett to name a few), that's an impressive mark. And it's one of many for the Ferndale, Wash., product, an in-state kid who has an NFL future in front of him.

"I've seen the guy for four years, and he isn't what he is without being one of the greatest competitors I've ever been around. He finds ways to get things done," Erickson said of Locker. "The guy's a warrior, just like Tim Tebow was... that's probably the best comparison I can have."

The Huskies are struggling on defense, but unlike the Sun Devils, they are executing in the red zone. UW is one of only five teams remaining in FBS (Division I) to have scored on every trip inside the 20. The Dawgs are 13-for-13 including eight touchdowns and five field goals.