The Arizona Diamondbacks announced on Sunday the acquisition of third baseman Chris Johnson from the Houston Astros in exchange for minor league outfielders Marc Krauss and Bobby Borchering.

This season, Johnson is hitting .279, has 8 home runs and 41 RBIs in 92 games for the Astros. Johnson will presumably take over as the D-backs' primary third baseman. The 27-year-old was one of the top hitters for Houston, ranking second on the team in RBIs and third in batting average.

Johnson will not suit up for Houston on Sunday, the Astros have a scheduled game against the Pirates at 11:05 p.m PT.

Media members swarmed Johnson in the Astros' dugout during the team's warm-ups at Minute Maid Park: 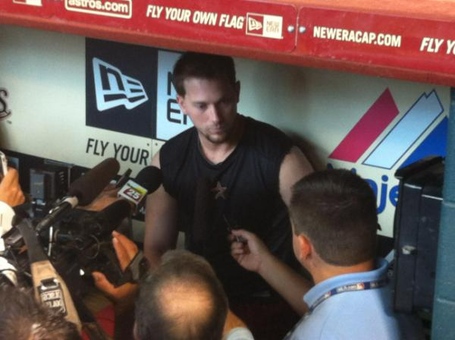 The D-backs are looking for offensive help and attempting to make a second half push to make the playoffs. On the other hand, the Astros could afford losing one of their top offensive threats, as the team holds the worst record in the MLB at 34-68.

For more news and analysis on the trade, head over to AZ Snake Pit. For an Astros' perspective, check out The Crawfish Boxes.