With their first-round draft pick in town with his family having agreed to terms with Diamondbacks, the club suited up the 18-year old catcher from Louisiana and let him take batting practice with the big-leaguers before Saturday's game against the Oakland A's.

After getting a few good cuts in, Trahan was swarmed by reporters. He said it was a "great feeling" and a "real honor" to be in the cage with the D-backs.

Trahan hit a home run into the pool deck and a got a cheer from teammates. He admitted being surprised that the Diamondbacks picked him. 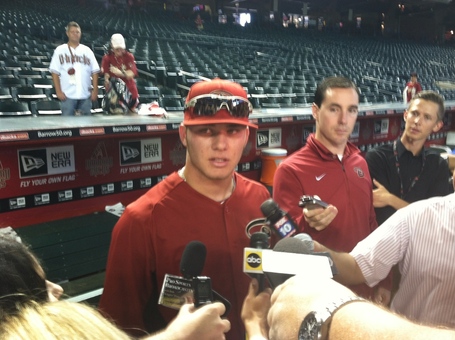 "It was awesome," he said. "I was in shock. The first thing I did was hug my parents and then hugged the rest of my family that was there."

Trahan's parents and younger sister made the trip out to Phoenix with him.

Trahan admitted he needs to work on his defensive skills as a catcher. He explained that he was named after a TV character portrayed by actor Burt Reynolds.

He had to take a moment to realize that he was getting dressed in the same clubhouse as big leaguers like Justin Upton and others.