Gerardo Parra Reacts To Winning A Gold Glove, Hopes It Is One Of 'Many More'

Share All sharing options for: Gerardo Parra Reacts To Winning A Gold Glove, Hopes It Is One Of 'Many More'

Before the game on Friday on Opening Day, outfielder Gerardo was awarded his Gold Glove for his 2011 performance defensively. He committed only two errors all season, showed incredible range in the field diving and catching any ball anywhere and throwing out runners with what could be called the best outfield arm in the game.

Catching up with him after the game, he showed the perfect mix of pride/confidence and humility as he talked about how he felt about winning the award. "I couldn't even begin to explain how exciting," he explained when asked to describe the feeling. "But I feel very very excited that I can work to achieve something you work hard for, and I was rewarded with this (Gold) Glove."

He recognized his efforts, which he should. "I worked hard," he said. "I never imagined I would win a Gold Glove, but I did work hard."

And while he is honored, he isn't satisfied, saying he wants "more than just the first, but that there be many more" Gold Gloves.

Here's the interesting part. It is the humility. He had a great year. He won a Gold Glove. But he didn't crack the starting lineup. Jason Kubel played in his spot. Parra came on late in the game as a defensive replacement. Despite that, he was all about the team.

When asked about the goals he has this year, it wasn't about him. It was "playing as a team, trying to get all the wins" that they can. He said that he thinks it is everyone's goal there on the team is "to make it to the World Series and win the ring that is waiting for them." He thinks that the team is good, even tremendous.

The kid is special. He is very talented, he works hard and wants to continue his success. He is honored to have gotten his award, but recognizes the work he put in. And above all, he wants the good of the team. 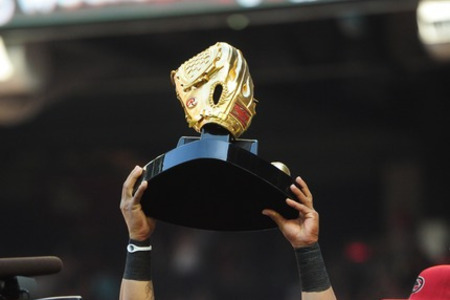 D-backs Magic Is Back; Down Six Battle Back To Beat Giants, 7-6