Roenicke asking his pitcher to throw on short rest for two consecutive games for the first time in his career shows how little confidence he has in Greinke's ability to win on the road.

It's a decision we have a hard time seeing Kirk Gibson ever making. Not to put words in his mouth, but it's likely he would see it as "giving in" to the situation. Even if he doesn't see it that way, I do.

Greinke threw 108 pitches on Saturday, 74 on Wednesday and will go again on Sunday for his third start in eight days.

Even the decision to rush Greinke to the mound on Wednesday showed a lack of faith in the rest of his rotation.

It's the kind of high-risk moves managers make that can easily backfire and certainly is a sign that Roenicke doesn't have full confidence in his team to deliver in any situation. Maybe it will work, but it sure does smell like over-managing.

No, Starting Zack Greinke Sunday Is Not A "Panic Move."
Simply put, there's no reason to believe that Ron Roenicke or anyone else in the organization is forcing Greinke onto the mound to avoid the alternatives. They're doing everything they can to put their best possible team on the field at home this weekend, and I think that's commendable. 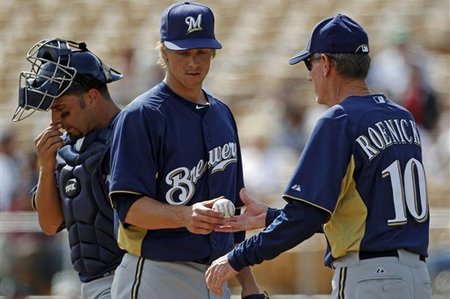