In the bottom of the 10th inning Tuesday night Ryan Roberts wrote another chapter in this crazy, magical and completely unpredictable season the Arizona Diamondbacks have rolled off.

The six-run, two-out rally was even more incredible considering it came after a pretty poorly played game that had me concerned about how this team was handling the pressure of the playoff home field advantage race.

Roberts himself had showed over the last two games just how frustrating he can be and then validated the trust Kirk Gibson puts in him by coming up with one of the biggest moments in a season filled with big moments.

"That was unbelievable, man, I've never been a part of something like that. Everything on this team blows my mind. All year long we've done the comeback wins and crazy things...That just goes down in the books as another one for me," Roberts said after the game.

If you felt the moment was historic, that's because it was.

Roberts walk-off grand slam was just the fourth in MLB history to come in extra innings with the team down three runs. Babe Ruth and Ryan Roberts will always and forever be on the same short list.

It was also the first time in all of baseball's long history that a team team came back from five-runs down in extra innings with a two-out rally and only the first time since 2001 that team has done it in the ninth inning or later.

When they say a baseball game isn't over until the final out, this is what they are talking about.

Considering the context of the playoff seeding race and more importantly, how poorly the D-backs played in the previous 18.5 innings, this rally was momentous by any stretch. Unless of course, your vision of baseball is through a fantasy and stats lens and then your first reaction is to complain that Micah Owings got a win on his stat sheet that he didn't deserve (which he didn't).

Baseball is better than any sport other sport when it comes to moments like this and we just witnessed one of the best of the season.

Here's the video of the hit, in case you had already left the game or turned the TV off.

These last two games were just another example of the roller coaster ride that is Ryan Roberts.

Ryan inexplicably tried to lay down a bunt in Monday's game with a runner on first and one out in the ninth inning down 4-2. Not only was the decision to sacrifice himself in that situation completely indefensible, he failed to even get down a good bunt and ended up having the lead runner thrown out.

Earlier in Tuesday's game, in a situation where a sac bunt was called for with runners on first and second, he once again failed to push the ball towards third and got the lead runner thrown out. Countless times this season we've seen Robert make boneheaded plays on the base paths and run himself into outs with his overly aggressive nature.

Gibson repeatedly just shakes his head when asked about Ryan and patiently explains that Roberts is who Roberts is and you can't pull back that aggression without losing what also makes him special.

Tuesday night we certainly got another look at what makes him, and this entire team, special.

We'd say there's no surprises left in this crew, but with the playoffs coming how could that possibly be the case? 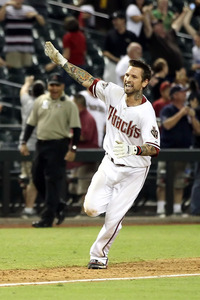 Ryan Roberts #14 of the Arizona Diamondbacks celebrates after hitting a walk off grand slam during the 10th inning of the Major League Baseball game against the Los Angeles Dodgers at Chase Field on September 27, 2011 in Phoenix, Arizona. The Diamondbacks defeated the Dodgers 7-6 in 10 innings. (Photo by Christian Petersen/Getty Images)