With the final out of Friday night's 3-1 win over the San Francisco Giants, the party began.

The Arizona Diamondbacks, that pesky little team no one believed in, turned Chase Field upside down with a champagne-and-beer fest in the clubhouse and a celebration with fans and team officials on the diamond.

Players poured alcohol on each other. They hugged and posed for photos. They wiped away a few tears, a little sweat and whatever was splashed on their heads and faces in a scene no one there will soon forget.

It happened. In Phoenix. The Diamondbacks won a division title and 42,606 were there, finally getting their chance to go crazy in the seventh inning when Arizona tied the game at 1.  Then came the heroics of the bottom of the eighth, featuring Paul Goldschmidt's huge triple, and then, J.J. Putz closing it out. And then the players and executives talked about all of it.

OF Chris Young, who doubled in the tying run in the bottom of the seventh inning:

"It was a team effort. The fans showed up amazing tonight. They gave us the adrenaline we needed to come out with this one." 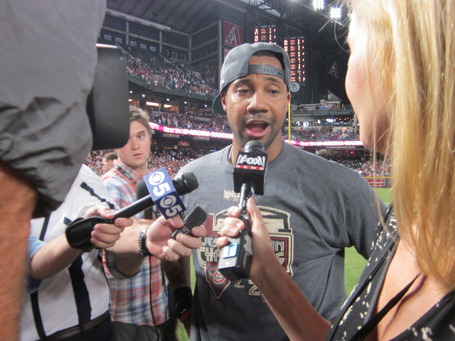 Owner Ken Kendrick, on thoughts of who the Diamondbacks play first in the playoffs:

"It doesn't matter to me just as long as we're there, and we are. And I'm thrilled about it. Very happy."

1B Paul Goldschmidt, who had the go-ahead RBI triple in the eighth inning:

"They'd been pitching around J-Up and Miggy, and it was just good timing for a hit and luckily it wasn't right at someone." 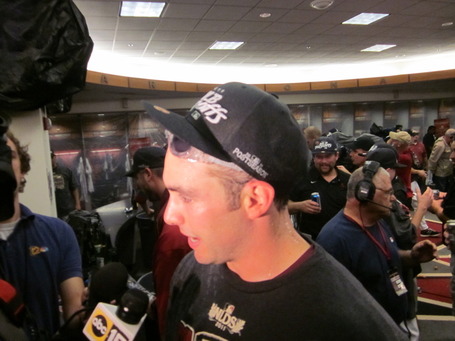 "It just feels good to win. It's been a blast. I don't think I can appreciate it like guys that have been in the league for a while. Getting here and getting that win, just glad we can do it for guys."

"We never let them (the Giants) catch us. Went in there, won those two out of three, that was probably the critical game, the last series we had with the Giants. We had that come-from-behind win and (took) the series from them... guys started really believing."

"We're dangerous late (in games). We kind of lull them to sleep early and late in the game the bats come out, and it's just exciting. Goldschmidt spent half the season in (AA) Mobile. To come up with a big hit like that, against arguably one of the greatest right-handed sliders (from reliever Sergio Romo) that there is in the game, pretty incredible." 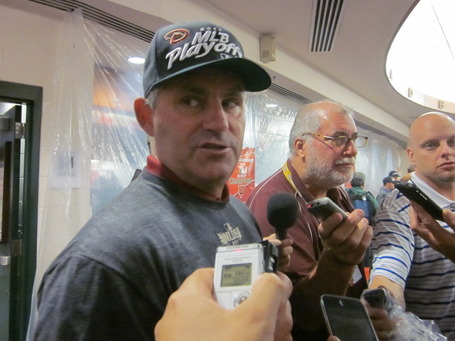 "Our eyes are on the Brewers. We want to be able to hopefully play those first two playoff games at home.

(On manager Kirk Gibson): "I think it's pretty clear the respect that the players have for him. He's one of the most focused managers I've ever had, from the minute he steps foot in the clubhouse to the minute he leaves. It's all baseball and preparing for the night's game and that particular series. During some tough times he kept guys loose, that's the sign of a great leader. He put his thumb on their neck when we were winning to kind of keep them humble. He was a winner as a player and now he's proven he's a winner as a manager as well."

"Everything this organization has been through the last couple of years, not winning a lot. I told C.Y. (Young) when I came over to Philly last year, 'This is for the birds, this losing stuff. I told him next year we're going to turn this thing around, we're going to win some ball games and sure enough, the team believes in itself and we believe in each other and that's the biggest thing."

"In spring training we lost a bunch of games, but we knew we were good."

"It was just a great honor to be out there in the first place...I didn't have my best stuff tonight but I got a lot of ground balls. Honestly, the defense was awesome behind me. We got a lot of clutch outs and big double plays."

"In order to be the best you've got to beat the best. We did that tonight. Hats off to them, they're an amazing club. It just goes to show how good we are and how good we can be so we're excited."

"You want to clinch on the first night, you don't want to wait around. For us to be able to do that is awesome."

"We gave ourselves a chance. In spring training, everybody said we'd finish fourth or third or whatever, but we didn't believe that. For us to get to this point and to finish it off really proved the character of our team."

"It's a good mix in the clubhouse and our team goes about its business in a different way this year. I think that was the biggest thing. We came to the yard expecting to win every day and we pushed towards that every day." 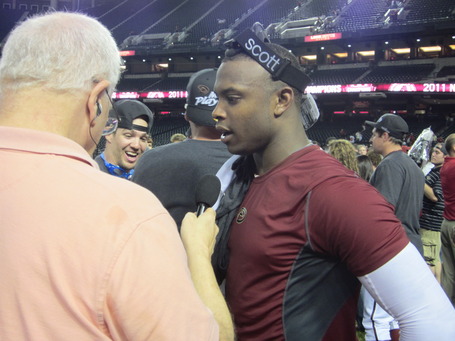 "We want to open up in front of a big crowd like we did tonight and we're playing for home-field advantage. So we're looking forward to these next five games and pushing toward that home field advantage."

"Everybody counted us out from Day 1 so the pressure was off of us. In spring training we gave ourselves a chance, we believed in ourselves and that's all that matters."

"Last year, I remember I wrote it down on my card, 15,505 people. A lot of people that thought that was a slap in our face but I think it was just significant, it showed us how far we had fallen. Those people are all still here. There's some more people day by day and you guys know that I understand that the fans are the most important part of the game of baseball."

"This whole organization from when we started our organizational meetings, it's incredible how everybody knows that they are a part of it. It's not Kirk Gibson. It's not just Derrick Hall. It's not just Ken Kendrick or Kevin Towers, it's truly all of us. There's hundreds of thousands of people that are involved."

"We talked about the Diamondback Way. I think it's becoming more clear as the days go on...This (celebration) is part of it."

Much, much more celebration video available on the SB Nation Arizona YouTube Channel.

D-backs Sweep Away Giants With 5-2 Victory