Share All sharing options for: Clayton Kershaw Ejection Right Call For The Situation

In the sixth inning of the Arizona Diamondbacks vs Los Angeles Dodgers game on Wednesday night ace pitcher Clayton Kershaw was ejected after he hit D-back left fielder Gerarado Parra with a fast ball. Parra had hit a double off Kershaw earlier in the game and was the catalyst on Tuesday night for a little dust up after he admired a home run hit off reliever Hong-Chih Kuo.

Kuo had earlier thrown a ball up near Parra's face which started it all (although it might have started even earlier in the year).

That's what happened in a nutshell. The question for discussion immediately when it happened and still the next morning is if the ejection by umpire Bill Welke was warranted. 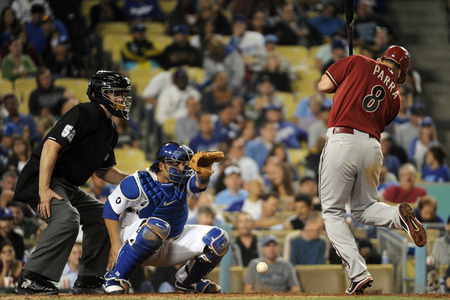 At the time of the incident D-backs TV announcers Mark Grace and Daron Sutton immediately defended the Dodger's pitcher and ridiculed the ejection as an inappropriate overreaction. Gracie went old school and said a pitch like that back when he was playing wouldn't even draw a warning.

Credit to Grace and Sutton for not being homers in this instance, by the way, but they were missing the bigger picture.

After the game, Kershaw predictably claimed it wasn't an intentional beaning but that's very difficult to believe. He had pinpoint control all night and didn't walk a single batter in the game and suddenly his inside pitch just happens to hit the guy (Parra) he yelled at from the dugout on Tuesday? He seemed to have said something like, "You get yours" during the yelling spat the night before.

I don't blame Kershaw for doing what he did. He's being a good teammate and frankly, that's the kind of fire you want to see from a leader on your team. He also didn't throw at Parra's head like Kuo did the night before.

But the Diamondbacks are still playing baseball for this season while the Dodgers are focused on next year.

If Kershaw is not ejected, Daniel Hudson or another Arizona pitcher is forced to retaliate and a brawl is all but certain.

Baseball brawls are normally tame affairs with a little pushing and jawing but no real fighting. This one, since it boiled over from the night before, very well could have been different as both teams would have had time to get amped up and "ready" to fight.

Those kind of baseball brawls, unlike the staged fights in hockey, are completely out of control once they start and can easily end in a player getting hurt.

In that type of situation, only the Diamondbacks lose since they are still trying to win the division and secure home field advantage in the playoffs. Even if an injury hadn't happened, suspensions would have been a near certainty.

Suspensions or injuries that wouldn't matter this season to the Dodgers could be very impactful to the D-backs.

Out of context, the inside pitch to Parra didn't warrant the ejection. If it had Kershaw had hit Willie Bloomquist he wouldn't have got tossed. But given everything that went on Tuesday and all the context surrounding the incident, it was the right call and the best result for the Diamondbacks in the long run.

Read more about this game at AZ Snake Pit and True Blue LA.

Diamondbacks Rally Late, Come Up Short In 3-2 Loss To Dodgers