Consider this another in the long line of "chemistry vs. advanced stats" arguments. It shouldn't surprise anyone who knows me which side I come down on but like my reasonable stats friends, I easily acknowledge and accept the value of Sabermetrics and other advances statistical measures in sports.

But recently it seems, and this is probably just reflection of what I'm reading and listening to, I come across far too much emphasis on the numbers part of baseball and derisive discounting of the human element.

Humans are tribal animals. The military understands that very well. They know that guys fight for each other as much, if not more than, for whatever grand cause sent them to war. Sports is our safe and accessible version of combat and teams (and street gangs) are where we see that come together.

"If you're up to bat and there's runners at first and second and you move both runners over with one out but yet you got out then you're OK with that because you just did something to help the team score runs which ultimately helps you win. So, the numbers and the individual success kind of go to the side," Roberts said.

But that's the just obvious example.

In football, basketball and hockey we observe "good chemistry" as physical effort and how hard guys play. In baseball, that's far less obvious. However, in baseball where much of the work is done between the ears, good chemistry is at least as important if not more.

How much time guys put in preparation for a match up or working on their swing or arm mechanics. How much focus a player has on the mound, in the field or at the plate. How much attention is payed to the tiniest of details that make up the margins between winning and losing.

That's where chemistry in baseball matters and all the stats can do is measure the results. Roberts explained, "Numbers aren't necessarily a reflection on anything. What is a reflection is what happens in the game."

Winning is the only result that matters and trying to guess how much winning a group of guys can do together based on how they've done elsewhere will only take you so far...and thank God that's the case or sports would be really boring.

It is far more interesting to see a group of "misfits" (as Joe Saunders called the 2011 D-backs) find that special magic and exceed all statistical predictions. 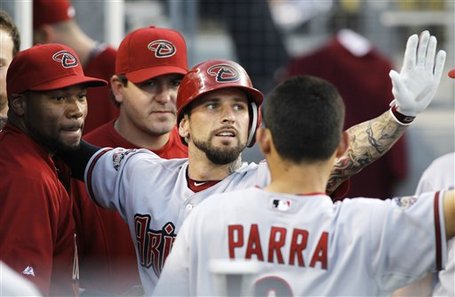 Arizona Diamondbacks' Ryan Roberts gets congratulated by teammates in the dugout during the second inning of a baseball game, Friday, July 29, 2011, in Los Angeles. (AP Photo/Danny Moloshok)