Share All sharing options for: Justin Upton's Defensive Play Of The Day

A couple of days ago Justin Upton was robbed of foul ball out when a rude San Diego Padre's ran reached into the field and stole the ball. Tuesday night, Upton made an even better play on a ball at a higher part of the wall. The catch was named ESPN's Top Play for obvious reasons.

Because MLB has silly and fairly incomprehensible rules about embedding their video, we can only give you a picture of the catch and the link to the video from Tuesday's game while we can fully share the play from the San Diego game on Saturday. 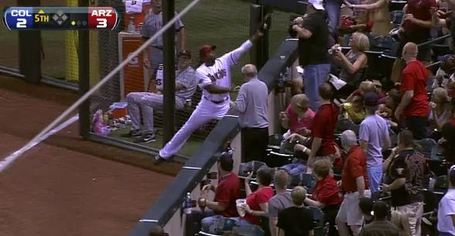