Ryan Roberts: The Poster Child For The 2011 Arizona Diamondbacks

Share All sharing options for: Ryan Roberts: The Poster Child For The 2011 Arizona Diamondbacks

At this point in the season, it has been said a countless amount of times -- the Arizona Diamondbacks are surprising everyone in baseball. With a five-game lead in the NL West with a month left before the playoffs, it has been quite a ride, especially since the team was not expect to contend this year at all. Some projections had them battling to stay out of the division cellar.

There is one player that essentially epitomizes the season that the Diamondbacks are having. That player is third baseman Ryan Roberts, who is having quite the year despite how it started back in spring training.

Roberts is on the verge of joining the 20-20 club. After his leadoff HR on Monday, he now has 17 homers and 16 stolen bases. He is batting .259 with a very respectable OPS of .793. He has played a career-high 121 games thus far. All of this comes from a guy who was not supposed to make the big league squad.

Roberts was caught in a numbers game in the infield. The team had signed veterans Melvin Mora and Geoff Blum to play third base after Mark Reynolds was traded. Roberts was impossible to get out in spring training, but the numbers were against him. He made the major league roster only because Blum got injured.

Roberts continued hitting when he got opportunities and Mora was ineffective and was eventually released. Blum returned only to get hurt again. As a result, Roberts has kept playing. When the trade deadline came around, many believed that the team would make a move to acquire a third baseman. It never happened.

At this point, much like the D-Backs have somehow found ways to win and succeed, Roberts has somehow managed to establish himself as the team's third baseman.

Is this what he pictured his year to be? "I can't say no or yes," he explains. "It started with making the team and then once I made the team it started with just trying to break into the lineup everyday."

He talks the way his manager Kirk Gibson handles things. Roberts isn't saying that he doubted his talents at all, but he is recognizing the need to, as they say in baseball, keep grinding as the year goes on. He acknowledges that he has "been fortunate to play a lot" and "blessed to get ABs."

As baseball milestones go, hopefully he can reach it and put that feather in his cap. It would be fitting in a year where a team like the Diamondbacks can, at least the way it is looking for now, make it to the postseason. 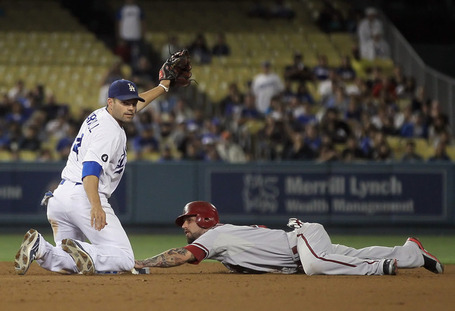 LOS ANGELES, CA - JULY 30: Ryan Roberts #14 of the Arizona Diamondbacks in the ninth inning at Dodger Stadium on July 30, 2011 in Los Angeles, California. The Diamondbacks defeated the Dodgers 6-4. (Photo by Jeff Gross/Getty Images)