Justin Upton's Maturity On Display Leading Diamondbacks To The Top

Share All sharing options for: Justin Upton's Maturity On Display Leading Diamondbacks To The Top

On Wednesday, the Arizona Diamondbacks took a half-game lead in the NL West but it was Tuesday's game that showed what this team was all about and why they are defying the preseason odds and experts. Look no further than Justin Upton's emergence as a leader for the main reason why the D-backs find themselves in a late summer pennant race.

Going into Tuesday's game against the Houston Astros, Upton was in a mini 2-16 slump and became upset early at umpire C.B. Bucknor's definition of the strike zone.

"C.B. kind of eye-walked him all the way out to the outfield, and I've had that done to me as a player," manager Kirk Gibson said. "You kind of get baited into getting thrown out."

Gibson talked to Upton in the dugout and gave him the option to do just that. He told his young player to "do what you got to do", only warning him not to go too far that he gets suspended for future games. Gibson also told Justin that he could choose to stick around and perhaps win the game for the D-backs who were down 7-1 by the fourth inning.

Upton, unlike so many other players we've seen recently, took the unselfish route and channeled his anger into focus at the plate.

"I know we've talked about how Justin's matured, here's another example of it. He didn't get thrown out. He regrouped, stayed in the game and had a huge game for us," Gibson said after the game.

The season's been filled with fantastic moments, but this one should rank right up there. When people ask how it is that the D-backs ended up in first place in mid-August, tell them about Justin Upton's maturity and leadership.

We know about Upton's plate prowess and while he's still prone to the occasional mistake in right field he's also able to balance that out with an ability to run down balls and make plays that would otherwise hurt his team.

But tools were never the issue with J-Up. The question for the 23-year-old former first overall draft pick in 2005 has been maturity.

We've seen older brother B.J. demonstrate wild inconsistency with his play and attitude to the point that the talented player was put on the trading block at the deadline. Justin, however, has shown growth in that area that his older brother (26) can't claim.

Perhaps some credit should go to his clubhouse friend, Chris Young. Perhaps this season's improvement can be traced to new hitting coach Don Baylor and a manager in Kirk Gibson who knows about being a highly-touted young prospect with an intense disposition and brightly burning competitive fire.

Ultimately though, it's Justin himself how's taking in the guidance and applying it on the field. The result is not only a talented player and dangerous bat, but a team leader who demonstrates through his actions that winning is more important than selfish desires. 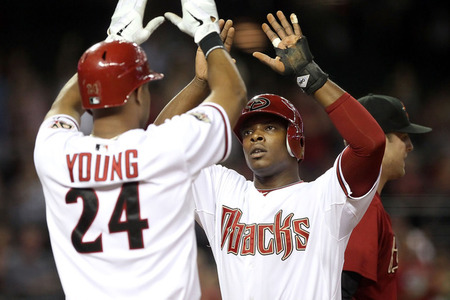 PHOENIX, AZ - AUGUST 09: Justin Upton #10 of the Arizona Diamondbacks high fives teammate Chris Young #24 after Upton scored a run against the Houston Astros during the first inning of the Major League Baseball game at Chase Field on August 9, 2011 in Phoenix, Arizona. (Photo by Christian Petersen/Getty Images)

D-backs Complete Yet Another Rally To Beat Houston, 8-5