Share All sharing options for: Upton-Powered Diamondbacks Rally For Win Over Dodgers, 6-4

The Arizona Diamondbacks have been impressive this season in bouncing back from bad performances. They rally late in games to eat up deficits and they've rarely had an extended streak of playing bad ball. Both traits were on display Saturday night at Chavez Ravine when Justin Upton personified the D-back's resilience by rebounding from a mistake in the outfield Friday to lift his team to a 6-4 victory over the Los Angeles Dodgers.

Upton misplayed a ball in Friday's loss (the error he was originally charged with was reversed) which caused a poor trash can to feel the Wrath of Justin. He wasn't the only one who played poorly in that loss and he wasn't the only who bounced back on Saturday. But right now, with the way Upton is stroking at the plate, this is his world.

The D-backs' 23-year-old right field soon-to-be-super-star broke the game open with a bases clearing three-run double with two outs in the fifth inning. Arizona went from down one run to the final margin of victory.

Credit also goes to the bullpen who picked up after a typical start you might expect from the fifth guy in your rotation.

Michah Owings wasn't terrible (5 IP, 4 ER) but he clearly wasn't great either. As we've come to expect, the eighth and ninth innings were handled well by David Hernandez and J.J. Putz but the real key to the game (aside from Upton's two-hit, three-RBI night) was the middle innings relief.

Ryan Cook (.2 IP, 1 H, 1 BB), Bryan Shaw (1 IP, 0 H, 0 BB), and Joe Paterson (.1 IP, 1 H, 0 BB) combined to hold the game for two critical frames to bridge the gap between the starter and the closing tandem of Hernandez and Putz. These middle innings have not been pretty and are the target of GM Kevin Towers in the final hours of the trade deadline.

Justin Upton had this to say after the game about his current 10-game streak, "I feel pretty good about it. (So do we.) We've got a long way to go. Obviously last year I got injured and it wasn't the season I wanted it to be. So my goal right now is to stay healthy and continue to swing the bat."

Since a four-game slump after the All-Star break, Upton is now 21-42 with 19 RBI and six home runs. He has 65 RBI on the season compared to 69 all last year. He's becoming that star right before our eyes this summer.

The rubber game of the series fires off Sunday at 1:10 p.m. PT with Joe Saunders facing Rubby De La Rosa. With the win and a Giants loss to the Reds, the D-backs are three games out of the NL West lead with a three-game series against the Giants starting Monday.

For more on this game, visit AZ Snake Pit. 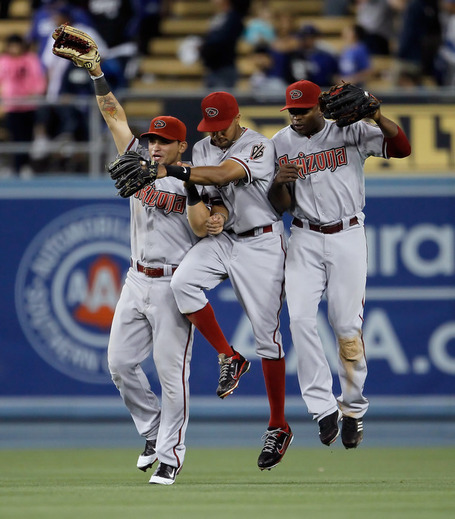 Diamondbacks Win 6-3 Against Dodgers, Pull Within Two Games Of Giants In NL West