Share All sharing options for: Jason Marquis Brings The 'Bulldog' To Diamondbacks

Jason Marquis will join his new team in San Francisco on Sunday and takes the mound for the first time in an Arizona Diamondback uniform on Wednesday. He'll take the spot in the rotation that was slotted for Josh Collmenter but that doesn't mean it's Collmenter and not Micah Owning who will get bumped to the pen. That decision will come later.

Rotation roulette aside, this was a great move for the D-backs and a sign of an aggressive organization willing to spend a little money to try and get better this season. Think of it as payback from ownership to the fans who endured the past two horrible seasons.

GM Kevin Towers pried Marquis out of Washington for a the price of a lower-tiered prospect (IF Zachary Walters) in a deal that fit exactly within the parameters he described just the day before. Towers said the D-backs didn't want to give up any top-end prospects but were willing to take on some salary and that's exactly what this move delivered.

Marquis is owed about $2.5 million for the rest of this season and then becomes a free agent. In other words, he was salary dumped by the Nationals and he couldn't be happier about it.

"Obviously, very excited," Marquis said on a conference call with media Saturday. "Going to a contending team that's knocking on the door of the playoffs. They thought enough of me that they brought me over to help with that run."

Marquis is described as an innings-eater by Towers and he improves the bullpen by pushing either Collmenter or Owings back into a relief role. They both could be back in the pen if Towers pulls off another, similar move before Sunday's MLB trade deadline and he gave every indication that could happen.

Skipper Kirk Gibson had this to say about his new starting pitcher, "We're happy to have him. Veteran guy, a bulldog. Knows how to pitch and we had a history with him."

That history Gibby is talking about was Marquis getting tossed from the game for hitting Justin Upton. Upton got beaned numerous times by the Nations in that series that ended with an ugly game and earned suspensions for both sides.

"Obviously, it was an unintentional pitch to Justin. It's part of the game," Marquis said.

Niether Gibson or Marquis expects any bad blood to carry over once Jason is wearing Sedona Red. Hopefully, his solid, if not spectacular, numbers will carry over. 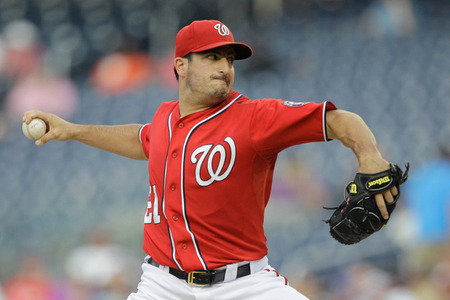