The Arizona Diamondbacks have signed their prize pick from the 2011 MLB Draft, Trevor Bauer. Bauer was taken third overall after putting up better numbers at UCLA than his teammate, first pick Gerrit Cole. The D-backs are on the road in San Diego but they held a press conference at the ball park Monday to introduce Bauer to the local media.

Bauer reports Tuesday to Single-A Advanced Visalia and will get his first start on Saturday. He'll be limited to two innings or 40 pitches in his first start to account for all the time he's add off since last throwing for UCLA on June 4 (9 IP, 6 H, 2 BB, 1 ER).

The terms of Bauer's deal haven't been officially disclosed but were reported to be $7 million over four years. He did allow that he would going to splurge on some "good food" but has no plans to buy a car or other expensive items.

"I wanted to sign as quickly as possible and go out and pitch," Bauer said. He was very complimentary of the Diamondback's organization and how the process has been handled.

As for his plans with the team, performance will dictate how fast he'll progress through the system.

"When you are talented as Trevor is, anything's possible," Senior Vice President, Scouting & Player Development Jerry Dipoto said. He added that giving Bauer a major league contract right away (he's on the 40-man roster) is a sign of how close he is to being able to contribute at the major league level. 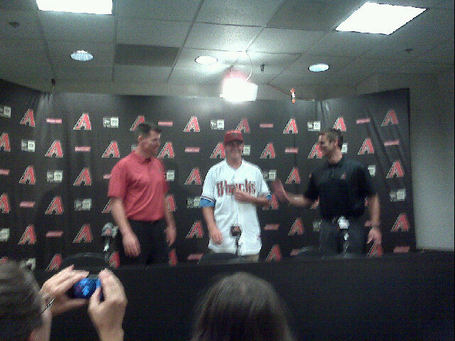