Share All sharing options for: Cheesesteaks And Chooch: Philly's A True Sports Town

Spending the weekend in Philadelphia makes one appreciate 1. Air conditioning; 2. Real and extremely dedicated baseball fans. 3. The taste of a ballpark cheesesteak.

The three blended together Friday night at Citizen's Bank Park, where SB Nation Arizona was for the Padres-Phillies game.

It was 100 degrees with a high humidity percentage coming out of the AT&T train stop and looking out at CBP, Lincoln Financial Field (home of the NFL Eagles) and the Wells Fargo Center, home of the Flyers of hockey and Sixers of the NBA. That's a statue of Mike Schmidt below. 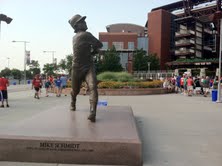 And yet, the Area of Stadia Named for Financial Institutions south of downtown Philly was teeming with people. No air conditioning, no Cool Zone fans, no cardboard fans, just a lot of free cups of water and sweaty people everywhere, and yet another sellout crowd at the ballpark (45,383) for the Phillies.

Compare and contrast that with our downtown gem, Chase Field, where climate control is the name of the game, a roof and cooling system protects fans from the searing dry heat and, like the Phillies, a winning product takes the field each night. At least this season.

The Diamondbacks are lucky to draw 20,000 or so fans on a hot Friday night when folks can get out of the heat. It's no knock on the organization; Affordable tickets and good promotions and a solid team are all a big-league city can ever ask for, really.

Phillies tickets are considerably more expensive. And the promotion Friday? 80s night. No giveaways, just 80s music and funny scoreboard stuff and the Phanatic mascot break dancing. The people came out, and when catcher Carlos Ruiz came up to bat, they let out a collective "Chooooooch!!!"

Walking around the stadium, it seems every other person was wearing a player T-shirt or jersey. A lot of Shane Victorinos, Roy Halladays and Cliff Lees. A good deal of Cole Hamels, Ryan Howard, Chase Utley and Jimmy Rollins, even some Chooch and Raul Ibanez gear. Phillies fans dig all of their players.

Citizens Bank Park is really quite nice. There are plenty of places to get a good cheesesteak and lots of good spots to stand and watch the game. The sound of the Liberty Bell going "bong" resonates after a win (it's not the real Liberty Bell), the smells of meat cooking waft through the air like an outdoor barbecue the views from everywhere, especially from the upper deck looking toward the city, are a bonus. 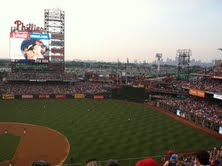 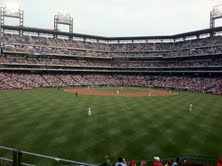 This is way better than the Vet, as in Veterans Stadium. What a dump compared to CBP.  And the fans come out, no matter what the weather. We were all sweltering in that heat Friday, and yet the baseball gods blessed us with a quick 3-1 game. The subway, though, was horrible. Packed and way too hot. Thank goodness this writer had only to go two stops before exiting.

A fan at the game had a sign that read "This Beats Shoveling and Ph-reezing!" Well, even if we can never get this kind of crowd and full-blown dedication from so many in Phoenix, at least we don't ever have to shovel snow or freeze. Here's hoping -- against so many odds, it seems -- that Phoenix gets to this level of passion one day.