Stephen Drew was called out at home in the bottom of the fourth inning on Wednesday night, but the end result was much more substantial: the Arizona Diamondbacks' star shortstop has fractured his ankle and will be out for at least 4-6 weeks, according to the KTAR 620 AM radio broadcast of the game between the Diamondbacks and the Milwaukee Brewers.

For those who missed the live play, here's a snapshot courtesy of CrossingBroad on Twitter: 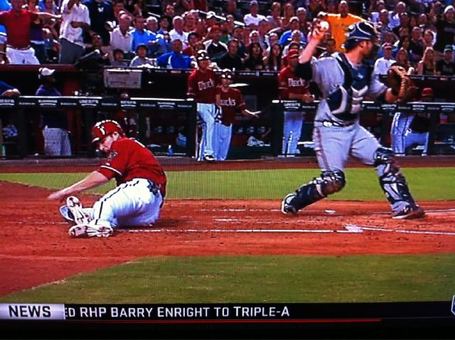 Judging from this image, it's pretty crystal clear that this wasn't just a simple break. You can tell that his foot is actually facing the opposite direction from where it normally is pointed.

When significant injuries occur, I like to point readers to Conquest Chronicles, who has an excellent database called "The Injury Clinic." According to our USC Trojans blog, ankle fractures can take up to six weeks to heal to the point where physical activity can be resumed.

Based on that timetable, it is unrealistic to expect Stephen Drew back on the Diamondbacks active roster until late September at the earliest. We could be looking at a season-ending injury, folks.

With the loss of Drew, the Diamondbacks will face several crucial decisions as the trade deadline approaches. Is Willie Bloomquist the answer at short for a team that's just four games back of the San Francisco Giants in the pennant race? Or does GM Kevin Towers need to make a significant move to shore up his offense?

KTAR also reported that Cody Ransom, 35-year old journeyman infielder, has been playing shortstop for Triple-A Reno and has been doing quite well -- he is batting .330 with 25 home runs so far in 2011.

It's too soon to think about what the next step is for the D-backs. All we can do tonight is hope that Stephen Drew recovers fully and is able to resume his productive major league career as soon as possible.