Share All sharing options for: Diamondbacks Score With All-Star Pregame

Hard to imagine the pregame ceremonies -- the ones after the NL and AL All-Star lineups were introduced -- being any better for local fans.

-A moment of silence - very poignant and powerful -- for the victims of the Tucson supermarket shooting in which U.S. Congresswoman Gabrielle Giffords was severely wounded.

-Introducing the families of the victims sitting behind the third base dugout.

-The family of shooting victim Christina Taylor-Green bringing out the lineup cards before the game, with All-Star managers Bruce Bochy and Ron Washington walking alongside them.

-A couple of heroes/lifesavers from the shooting throwing out the first pitch.

And so the game is on. Saw the gentleman in photo below on the corner of 5th and Jefferson silently showing his stance on SB 1070. There were others outside the stadium offering white ribbons of solidarity to fans while a few people near them held signs in support of Sheriff Joe Arpaio. 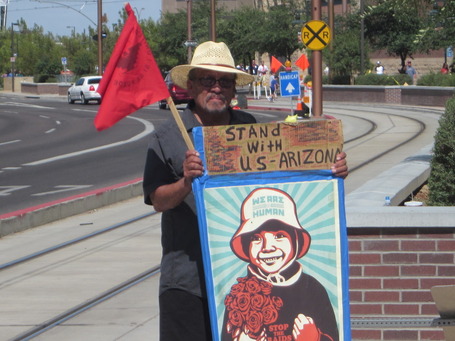 Inside Chase Field, it was boos for a lot of players being introduced. All of the Yankees and Red Sox players were booed; so were all three Dodgers (even hometown boy Andre Ethier) all one million Giants (OK only five) and a few carry-over boos for the two Brewers in the home run derby, Prince Fielder and Rickie Weeks.

The fans cheered former Diamondbacks Carlos Quentin and Jose Valverde plus hometown boy Paul Konerko, and all of the D-backs were cheered with gusto.