Prince Fielder got nothing but boos from the crowd at Chase Field as he was introduced at the Home Run Derby. So did teammate Rickie Weeks.

The fans weren't happy about NL team captain Fielder's choices for the derby, which did not include the D-backs Justin Upton, even though Fielder seemed to win over the fans with some tape-measure shots to right field that drew "ooohs."

Even Matt Kemp from the hated (by some, certainly not all) Los Angeles Dodgers got fewer boos than Fielder and Weeks.

It sure was strange to see so many people at Chase Field. Did NLDS games in 2007 draw this many fans, and were half of them Cubs fans?

Fielder was booed every time his name was mentioned. It even happened during batting practice, with Daron Sutton trying to do an on-field interview with the stocky Fielder. A chant of "Justin Upton!" with clapping came from the left-field seats as Weeks took his turn. 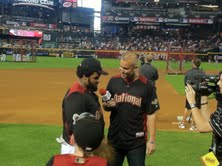 Walkup music, just for the record: Adrian Gonzalez walked out to 50 Cent's, "In the Club," and his second HR went into the pool in right field.

Matt Holliday: That song about "The Dougie" dance.

Robinson Cano: "Empire State of Mind" (Alicia Keys/Jay-Z). Coolest thing about his turn was his dad, Jose, pitching to him.

Weeks: Missed it, I was getting a sandwich.

Jose Bautista: A rap song that sounds like Ozzy's "Crazy Train." A disappointing four HRs only.

Matt Kemp: Snoop's "Drop It Like It's Hot." No hat or helmet on his head. Only two HRs, and more Upton chants.

David "Big Papi" Ortiz: "I Love It When You Call Me Big Poppa" - The late Notorious B.I.G.

Fielder: "Boooooo" by People For Wily Mo. Just kidding. Something by Ludacris I think. Didn't matter. Boos drowned it out.